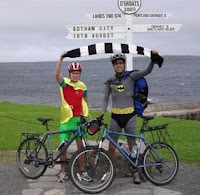 Newcastle fans Jonathan Heron and Kyle Stubbs, dressed as Batman and Robin, set out from John O'Groats a week last Sunday, aiming to cycle to Lands End by bike in aid of the Sir Bobby Robson Foundation.

They were sighted on Wednesday afternoon near Bristol - still on track.

Chewing gum and kicking a ball at the same time

Chewing gum and playing soccer proved a dangerous mix for one Brazilian player.

Aloisio, a striker for Vasco da Gama, wound up in the hospital after colliding with an opponent and choking on his gum during a second-division game Tuesday.

He was released from the hospital and avoided serious injury.

Doctors said he injured his head and stopped breathing momentarily, the gum obstructing his airway.

"It was a very serious situation," Vasco doctor Paulo Cesar Rocha said Wednesday. "Luckily, we identified the problem quickly and took the gum out to help him breathe again."

Aloisio, making his debut as a starter for Vasco, was struck hard in the head while challenging for a high ball near midfield during the second half. He collapsed and lost consciousness for a few moments.

Doctors rushed to him and an ambulance came on the field at Boca do Jacare Stadium in Brasilia.

"I don't remember a lot," Aloisio told local media Wednesday. "I only remember the doctor taking the gum out. I have never been scared like this - no more chewing gum for me."

Aloisio was released from the hospital hours after he was admitted. He is barred from physical activity for at least a week as a precaution. More tests will be done next week to determine when he can play again. 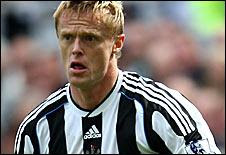 "I'm as loyal as they come and, whether the gaffer stays or goes, I'd love to try to get Newcastle back up."

"It's got to be an honour to play for Newcastle United Football Club. I know there will be changes but I don't know what's going to happen. As players, we haven't got a clue but I'd just ask the fans to stick with us next year."

Fulham completed the signing of Newcastle's Republic of Ireland winger Damien Duff for an undisclosed fee.

"I know that having spoken to the manager in recent days that the club's ambitions remain high and I am looking forward to the challenges ahead." 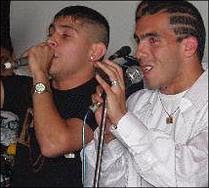 The Argentinian has promised Latin dance classes in exchange for a music masterclass for his band Piola Vago from City's most famous fans.

Tevez and his brother Diego are Buenos Aires' answer to The Gallaghers, notching up a bit of chart success in their homeland with hit single Lose Your Control a few years ago.

Middlesbrough defender Andrew Taylor is launching a website aimed at helping fellow players avoid being ripped off or getting bad service.

He came up with the idea after being dissatisfied with a company that installed an audio system in his home.

Platinum Players will feature companies that offer "luxury lifestyle products" - from cars and gadgets to hotels and restaurants - which have been vetted and deemed "trustworthy" for the stars.

The UK's 4,000 professional footballers will be sent log-in details for the invitation-only site.

Striker fined for drinking beer during a game

Burnley striker Steven Thompson has been fined a weeks' wages for having a beer during a game.

Unable to curtail his sprint at Portland Timbers PGE Park in the final game of the Clarets’ tour of America, the front man gatecrashed a pitchside beer garden.

"I kind of fell over the billboards at the side of the pitch and there was a cafe right on the side," Thompson explained.

"I landed on this person’s table and I don’t know what happened, I just instinctively grabbed this guy’s pint and had a drink.

"It shows you how bad a game it was that it got the biggest cheer of the night.

"It was just a bit of fun and it went down well, it was a bit of light-hearted banter, and the guy was really decent about it. He was laughing.

"The manager did say I was fined a week’s wages though for being the first player he’s ever seen drinking during a match.

"I think that will be a first and last and one and only!" 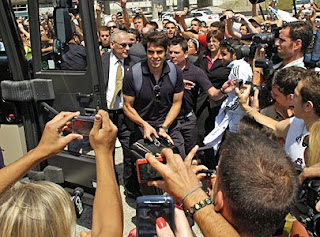 Temporary grass has been installed on top of the usual artificial surface for the game, which was a demand from Real before they would agree to play.

They trained on the field yesterday for 50 minutes in an open session offered to fans for $15, and 18,000 people turned up.

West Brom will show their backing for England's 2018 World Cup bid by wearing "England 2018" logos on their shirts for Saturday's game with Newcastle.

"It would be a dream come true for every fan in this country if we earned the right to stage the World Cup," said West Brom chairman Jeremy Peace.

"This is a great opportunity for us, as a club, to play our part."

West Brom normally play without a sponsors' name on their shirts. 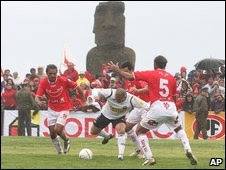 The islanders played their first competitive fixture in the Chilean Cup.

The game ended in a 4-0 defeat at the hands of 28-time Chilean champions Colo Colo.

The game was played on an atrocious, bumpy pitch just yards from the beach, where virtually the entire population of 4,000 islanders turned out to watch. 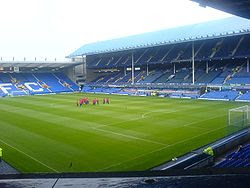 Everton's plans to build a new 50,000-seater stadium have been jeopardised by a colony of water voles.

The Merseyside club want to move from their present Goodison Park home to a state-of-the-art arena in Kirkby, a northern suburb of Liverpool, but the protected species has been discovered on the prospective construction site.

The rodents live on the banks of Kirkby Brook, which crosses the site, and must be moved before building work can take place.

Developers must complete the relocation before autumn, when the animals hibernate, as it is illegal to disturb a sleeping vole.

A spokesman for Knowsley council, which has backed the move, said: "As landowners, we have granted a licence for our land to be accessed in order for ecological works to be undertaken.

"These works will ensure the safe translocation of a protected water vole habitat in Kirkby Brook.

"The work will include the erection of safety hoardings, systematic clearing of overgrown vegetation and vole assessment."

Everton's Kirkby project is still awaiting final approval pending a public inquiry, the outcome of which is expected by November. If the stadium gets the green light, the Toffees will move there in 2012.

The start of the football season in Argentina has been delayed indefinitely because many of the clubs involved are heavily in debt.

The season had been due to kick off on 14 August, but the Argentine Football Association (AFA) said some clubs did not have enough money to pay players.

Last week, clubs in the second division had the start of their season postponed for similar reasons.

Russian fans have been told to drink whisky on their trip to Wales for next month’s World Cup qualifier to avoid swine flu.

"We urge our fans to drink a lot of Welsh whisky as a form of disinfection," said Alexander Shprygin, head of the country’s supporter association.

"That should cure all symptoms of the disease."

Russia’s Health Ministry has warned against travelling to Britain but Shprygin said he expected several hundred fans to go to Cardiff.

Cristiano Ronaldo's legs have been insured for £90MILLION by Real Madrid.

The Spanish club - which bought Ronaldo for a record £80million in June - want to protect their money if he picks up a long-term injury.

Bosses got nervous after Ronaldo, 24, knocked his knee recently, but Real's doctors have since given him the all-clear.

The ace has already been fouled 34 times in three pre-season games.