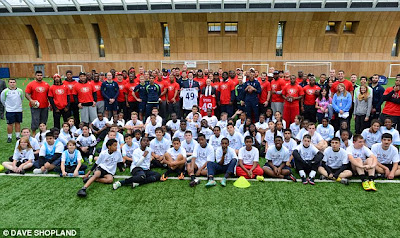 Tottenham welcomed the San Francisco 49ers into their training headquarters on Monday for a community event for young children.

British Olympian Lawrence Okoye, who is currently with the San Francisco 49ers, was also in attendance on Monday.

He said: ‘This is a good opportunity for me to come back and see everybody. I’m a United fan even though I’m from London - most of our fans live in London anyway. I wanted to meet Bale, but he’s gone to Madrid now.’

The 49ers flew to Heathrow straight from Tennessee, where they beat the Titans 31-17 on Sunday, rather than heading home to the West Coast first.

Their opponents at Wembley on Sunday, the Jaguars, arrive in England on Tuesday morning.