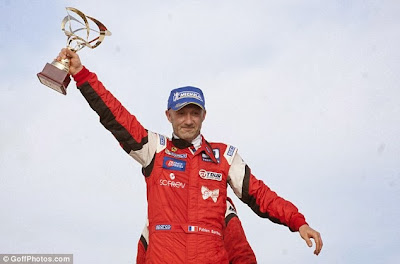 Barthez and Moullin-Traffort won four races in the 2013 series in their Ferrari 458 Italia GT - which can travel up to 200mph - and stood on seven podiums.

The Ferrari is a similar model to the one driven by the likes of John Terry and Frank Lampard around the streets of London.

Barthez, 42, only began a career in motorsport in 2008 after retiring from football a year earlier.

The 87-cap international told Le Mans live: ‘I have always been fascinated by motorsport, even when I was playing football. It always intrigued me.

‘I wanted to understand what it felt like being in a car. I had to wait until the end of my pro career to try it.

'That said, it’s not like football: you can still be good even when you are 35, which was my age when I stopped playing.’