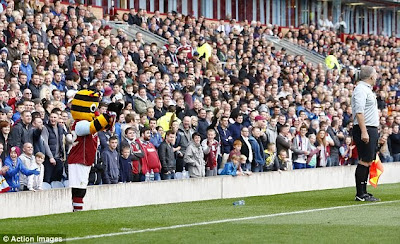 Bertie Bee has escaped punishment after the Football League decided not to pursue any action against the Burnley mascot for being sent off during the Championship clash against QPR.

League officials have spoken to the club to reiterate the boundaries of acceptable behaviour as far as mascots are concerned.

Bertie had the crowd in stitches with his cheeky gesture just 15 minutes into Saturday's 2-0 win as he attempted to hand a pair of glasses to the linesman.

However, the referee failed to see the funny side and sent him to the stands.