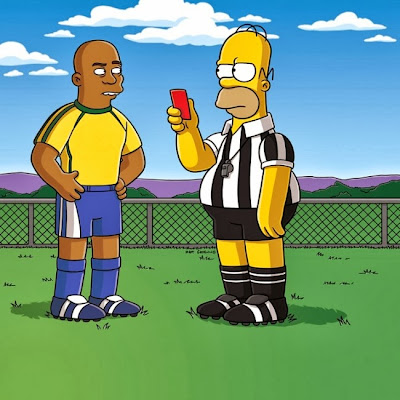 Homer Simpson is set to become a referee at next summer’s World Cup in Brazil - as part of a new Simpsons episode.

The cartoon legend will briefly put down his beloved doughnuts and pick up a whistle in the episode set to be screened next year.

As an error-prone buffoon who often makes calamitous decisions, being a referee might appear to be the perfect choice for Homer.

But broadcasters Fox say the Springfield-based ace will have to deal with South American gangsters who try and influence him to fix World Cup matches.

‘The episode follows Springfield’s most famous family as it journeys to Brazil, only to find Homer’s honesty put to the test by one of the slickest South American gangsters in the soccer match-bribing business,’ read a statement.

The plot line might be an uncomfortable one for Fifa, who have been dogged by corruption claims, but Fox actually hope it will help plug football (or ever soccer) in America.