Howard credits penalty save to his beard 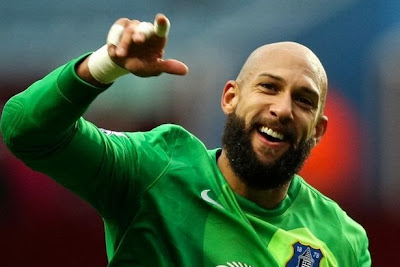 Everton and US goalkeeper Tim Howard has paid tribute to his beard following the club's 2-0 win over Aston Villa on Saturday.

The Blues scored two second half goals at Villa Park, with Romelu Lukaku and Leon Osman finding the net but they could have been behind had it not been for Howard's first-half heroics.

The American stopper denied Christian Benteke from the penalty spot with a fine save before keeping out Andy Weimann and Gabriel Agbonlahor.

And Howard told Everton's official website how his facial hair had a part to play in the penalty save, before offering a more serious account.

He joked: "I think I've gained most of my strength from the beard."

"If I'm honest it was lucky. I thought Benteke would go to the right. He is a very powerful boy and for a right-footer, that's his power side.

"I didn't get it quite right as he went high but I got a little bit of luck, reacted and kept it out."