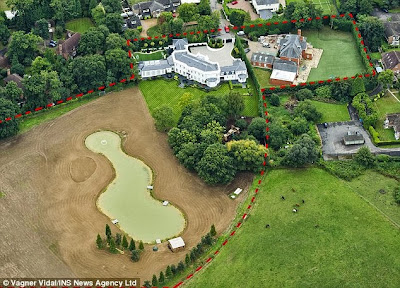 Nestling behind a massive man-made lake, the new house dwarfs Terry’s old house, which he reportedly had to re-mortgage four times.

Three years after he first tried to sell the red-brick nine-bedroom Surrey mansion, it has been sold for £5.25million.

However, helped by the current burgeoning property market, he has finally sold it for more than the £5m asking price.

The sale will help the 32-year-old finance the new mansion which he has had built in his back garden - a short drive from Chelsea's training ground in Cobham.

Constructed at the end of a private road, the huge new home, which he shares with wife Toni, is hidden away from prying eyes and is only clearly visible from the air.

It comprises eight dressing and bathrooms, nine bedrooms, a swimming pool and sauna.

The mansion even has its own private cinema.