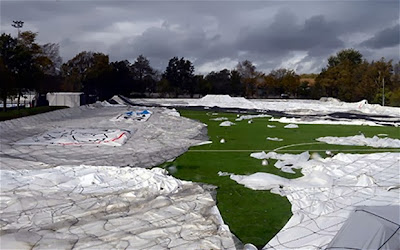 Ajax coach Frank de Boer and his players had a lucky escape as they prepared for Tuesday's KNVB Beker Cup tie with amateur side ASWH.

De Boer and his side were preparing for the home tie when they decided to leave the temporary building they were training in only for it to blow down later in high winds.

De Boer was worried by the strength of the winds and decided to take his players out of the inflatable structure which later collapsed under the barrage.

The coach told the club website: "This was a good choice (to leave the building). A storm is the worst circumstance in which to train."

On his decision to leave the structure, he added: "We found the risk too great."