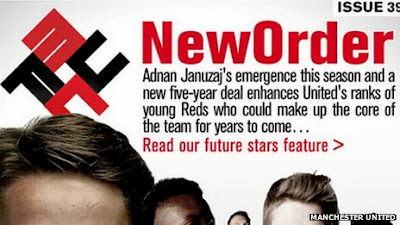 Manchester United has apologised after a 'swastika-style' logo was sent out to fans in a newsletter alongside the Nazi affiliated title "New Order".

The similarities between the logo, which spelt out the letters MUFC, and the Nazi symbol were pointed out after United Uncovered was issued via email.

It said the title related to the band New Order, and that the feature was about the club's young players.

The statement, which was emailed to fans, said: "In this week's United Uncovered email newsletter, a graphic spelling the letters MUFC ran alongside a feature about Manchester United's younger squad members entitled New Order.

"While the headline was intended to reference the band of the same name, it has been pointed out that the graphic had design similarities to a swastika which, combined with other connotations of the phrase 'new order', has caused offence which was entirely unintended.

"For this, United Uncovered unreservedly apologises."

The club's head of media David Sternberg responded to a number of complaints over Twitter.

He tweeted: "The creative is completely inappropriate; we apologise unreservedly and are taking appropriate internal action."