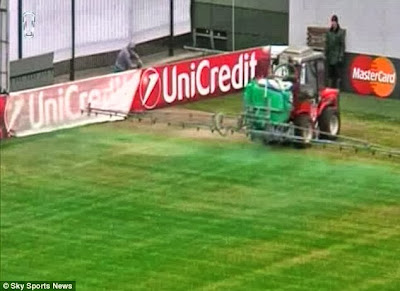 CSKA Moscow have left Manchester City bristling with indignation by painting their pitch to try and conceal huge bare patches.

City boss Manuel Pellegrini condemned the Khimki Arena surface as unfit for Champions’ League action, after branding it unacceptable and calling it ‘unbelievable’ that UEFA bosses had given it the go-ahead after inspecting it last week.

In an attempt to deflect some of the criticism, CSKA officials ordered their groundsman to spray a green, paint-based substance on the pitch, prior to television beaming pictures of it round the world.

City boss Manuel Pellegrini had voiced his amazement on Tuesday that UEFA have given the green light for the match with CSKA Moscow to take place on the worn-out Khimki Arena surface.