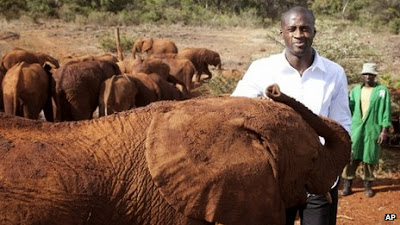 Yaya Toure has joined a UN campaign against poaching, warning the slaughter of elephants threatens their existence.

Mr Toure said there were only 800 of the "magnificent creatures" left in his country, Ivory Coast, whose national team is known as "The Elephants".

He has been appointed a goodwill ambassador by the United Nations Environment Programme (Unep).

Poaching has risen sharply in Africa in recent years, fuelled by Asian demand.

Elephant tusks are used to make ornaments and rhino horns for traditional medicine.

"Poaching threatens the very existence of the African elephant and if we do not act now, we could be looking at a future in which this iconic species is wiped out," the Ivorian footballer said at a press conference in Kenya's capital, Nairobi.

"Ivory Coast's national team is named 'The Elephants' after these magnificent creatures that are so full of power and grace, yet in my country alone there may be as few as 800 individuals left," he added.