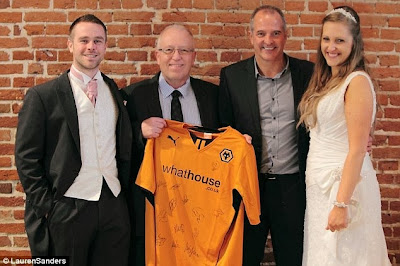 A die-hard Wolves fan who was forced to miss his first home game since 1976 due to a family wedding had a huge surprise when club legend Steve Bull made an appearance at the ceremony.

56-year-old Peter Abbott said he was astonished when the Wolves record scorer turned up as part of a surprise arranged by the League One club to show their appreciation for Abbott's loyal support.

Speaking of the surprise, Abbott said: 'They were doing photos and I was called over and all of a sudden one of the chaps with his back to me turned around and it was Bully.

'The club arranged for him to be there as a big surprise - he's a legend.

'We talked about the old days and where the club is now - a fan's conversation really.'

The Wolves super-fan grew up in east London and has been making the 330-mile round trip to Molinuex ever since he fell in love with the club in 1970.

Abbott claims that the last home match he missed was against Tottenham on 16 March 1976 and only missed their 1-1 draw with Coventry City to attend his stepdaughter's wedding.