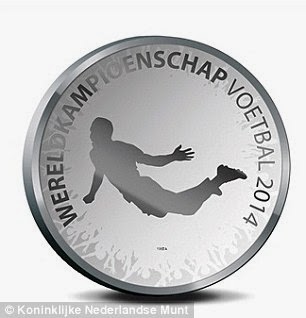 The Manchester United striker opened Holland’s World Cup account with a strong contender for goal of the tournament in their first group game against Spain, where they ran out 5-1 winners against the reigning champions.

And now the iconic image of his dive has been placed onto a coin to ‘honour the achievements of the Dutch team in Brazil’, with Louis van Gaal’s men still to play their semi-final against Argentina tomorrow.

The coin can be bought from the Royal Dutch Mint for €9.95.