The Sunday Times reported recently that at least five professional soccer players in England have had stem cells from the blood of their children's umbilical cords frozen. It's being done to protect their progeny in the event of future illness, but is also seen by some of the athletes as a potential aid to fix their own damaged cartilage and ligaments in the future.
One unidentified Premier League player told the British newspaper: "As a footballer, if you're prone to injury it can mean the end of your career, so having your stem cells — a repair kit, if you like — on hand makes sense."

If I could do one of these moves, I'd be happy.

In total, Anelka is the second most expensive player in football history. Only Juan Sebastian Veron tops him:

Will he be the next Feruson ? I don't know. My 'gut feeling' is that he's too much of a loose cannon to be successfull - it's not enough to strike fear into the player's hearts, you also have to get their respect. I do think he was a very good player, notwithstanding his various violent tactics, but lifelong habits don't go away overnight, so my bet is that he won't last more than 6 weeks.

He was always one of those players who you love if they're on your team, but hate with a passion if they're on the opposition team.

Cole's switch hangs in balance as Chelsea and Arsenal haggle

The Cole transfer saga is the biggest bore in football for a long time. I know there's a lot of money at stake, and he's an excellent player, but can't they just get together and make a deal ? There's been talk of a 20 million quid offer on the table ... for a defender that's quite an amount, for any team.

The Premiership has been screwing fans with kick-off times for a few years, and maybe now is the time that it's starting to cause problems. Forcing fans to make unbelievable travel arrangements just to accomodate t.v. start times has got to stop if they expect people to actually turn up at the games.

Maybe the toothy one is on the outs at Real Madrid ... I wonder what the odds are that Chelsea will get him. It would certainly be nice to see him in the Premiership, but I haven't seen any comments from him of any desire to play there. 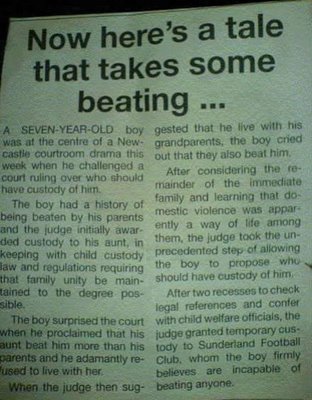 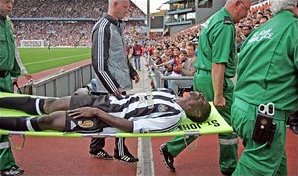 Seems like this is how most Newcastle strikers leave the field these days. 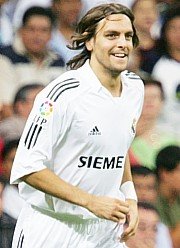 90K a week for a crock with a bad haircut seems a bit excessive.

To be fair, he's an excellent player when fit ... the problem is that he's never fit.

The funny thing is that there are 2 articles on soccernet within a month or so of each other - one saying that he wanted to prove his worth to the new Real Madrid manager, and the other saying that he wanted to come back to the Premiership. I guess that he changed his mind when he realized that he probably wouldn't be guaranteed a first team place.

Here's a vid of the foul on Pedro Mendes that's causing all of the commentary at the moment. It's the first time I've seen it, and I have to say that it does look particularly vicious and premeditated. How he can escape further punishment is quite unbelievable - the fact that the referee gave a yellow shouldn't mean that they can't also review video and hand out a ban or a fine.

Anelka back in the Premiership 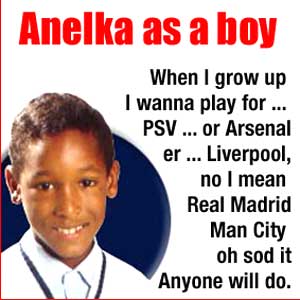 I know that he can score, but he's caused trouble wherever he's went ... when will they learn ?

Xavier back in training with Boro

Good to see him back ... a different hairstyle every week, and an uncanny resemblance to Tygra from thundercats. 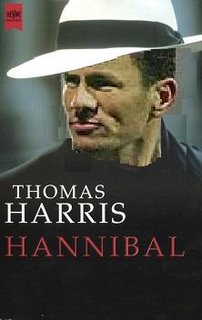 Apparently, his nickname is Khalid the Cannibal, which he showed in the World Cup when he left his stud marks on Cristiano Ronaldo's thigh. 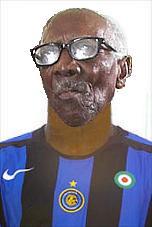 Maybe Newcastle should check his birth certificate before they sign him. 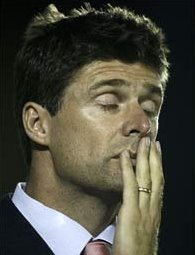 He says that he's going to appoint a world-class manager by the end of the week ... I wonder how many managers will actually want to go there after the way they've been playing.

The right-sided midfielder is a tree 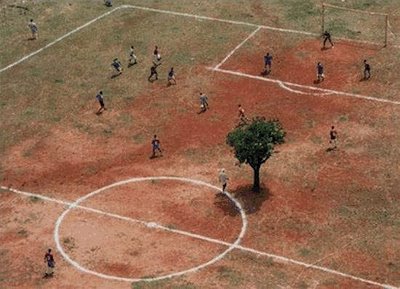 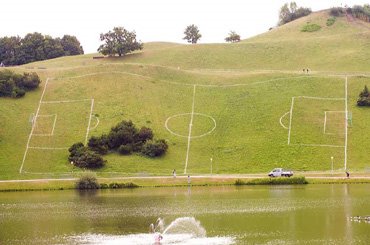 Wow - after seeing him break his leg (and dislocate his ankle), I thought he'd be out for a lot longer. I've always been a fan of his though - he'll always give 100% - so good luck on his comeback.

Doesn't look as if Rooney holds a grudge 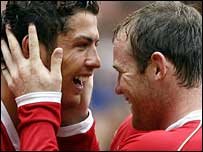 "A contract with Bayern Munich is a contract"

Yeah right - I have yet to see a player stay at a club when he says he wants to leave. My bet is that Hargreaves will be playing for Man Utd within a couple of weeks. There have been a couple of contradicting articles, but he'll be out of there soon.

I don't really agree with it ... if you sign a contract, it should be binding, but players cannot be forced to play.

Time to wave goodbye to the diving cheats

A very interesting article from the Daily Mail about getting rid of diving and other nefarious tactics from the game. If they can review video for cards to be revoked, then surely they can find people who are deliberately diving and punish them accordingly.

It's a little interesting that Sir Bobby Charlton is a supporter of the project though, considering that Ronaldo is one of the biggest culprits.

I'm also glad that they're trying to stop the practice of players kicking the ball out of play when an opponent is down - it got totally out of hand at the World Cup, and I wouldn't want to see it continue. It's fair enough if it looks as if someone is seriously injured, but they were kicking the ball out just for someone suffering from cramp.

The reformed Spice Boy who sows hope in Africa

An interesting article about David James - I was never a great fan of his, but he certainly moves up in my opinion because of what he has to say.

So who exactly is streaking ?

I don't see the problem personally - isn't it just supply and demand ? If the buyer is willing to pay the price, then everyone is happy, and a ticket that may have gone to waste is put to good use. 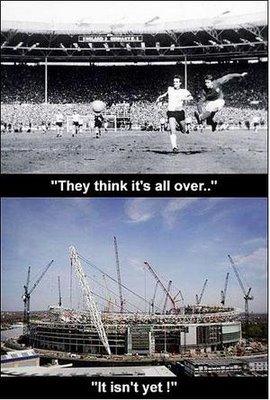 The BBC site has an interesting article about who will be the first manager to get the sack this season, and Sir Alex only has a Sack Rating of 3/10. However, this article in the Guardian is a little bit more cautious.

I wonder how much time the Glazers will give him if the season starts out badly.

I feel sorry for the guy, but McClaren really is the master of understatement ...

"It has really clouded our morning," admitted McClaren.

Yeah, I'm sure it didn't do too much for Ashton's morning either. 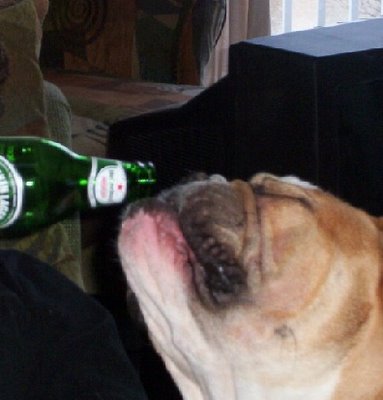 Maybe someone spiked the dog's drink.

A billionaire owner, an experienced manager ... I wonder if Villa can be the next Chelsea. I'm sure that Martin O'Neill wouldn't have been tempted back into managership without assurances that he'd have money to spend. 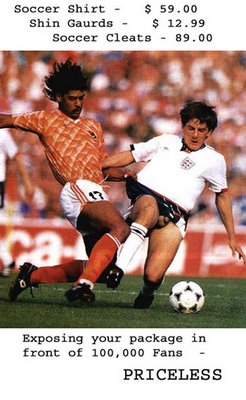 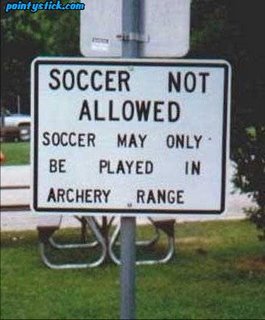 The Sun reports that "Former England captain David Beckham, who was dropped by new national team boss Steve McClaren for Wednesday's friendly against Greece, faces starting the season as a substitute for Real Madrid."

How the mighty have fallen. If he's dropped, maybe he'll consider a move back to the Premiership.

CHANT OF THE WEEK 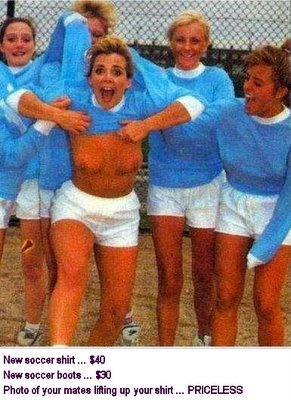 On top of all his other problems, now Gazza's moaning about his step-daughter. He does have a point though ... other than being loosely related to him, what exactly is she famous for ? Another case of being famous for being famous. 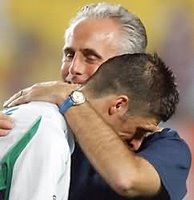 They couldn't buy a win last year in the Premiership, and it looks as if their form has continued in the Championship. Here, Mick McCarthy consoles Niall Quinn for sinking all that money into the club (he looks glad to be out of there). 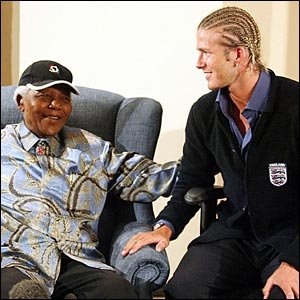 Looks like his England career may be over - which may be a good thing considering his recent performances.

I can never quite forgive him for the braided hair either ...

Odds to win the Premiership

Bulimia, alcoholism, OCD, bipolar disease ... Gazza's got them all

Here's an interesting interview with Gazza where he opens up about his many problems.

First they sold World Cup air, and now they're trademarking the infamous headbutt

Pre-season tours: what are they good for?

An article about the pro's and cons of pre-season tours. It seems to me that generating revenue is sometimes the focus, rather than preparing for the upcoming season.

With their lack of attacking players, I'm guessing that Newcastle will go with the old 5-5-0 formation.

Hargreaves voted No1 with England fans

Wow - that's quite a turnaround for the guy after taking so much abuse over the past few years. I do agree with the poll though - he was outstanding in the Portugal game.

"Trust me ? Of course you can trust me." 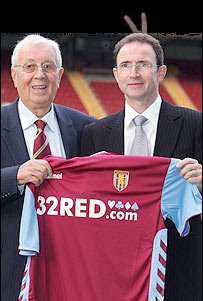 Yeah, right ... the last time I got wasted, I reckon that my drinks were spiked too.

Not too sure about the last one ...

Got this from the Daily Nooz blog ...

The Washington Post asked readers for bad advice to immigrants to the United States. Some of our favorites:

If you're not sure exactly what someone said to you in English, it's always polite to respond, "That's so gay" or "God, that's retarded."

They may not taste good or seem filling, but you really should eat all your food stamps every month.

To make sure he doesn't spread germs in a public place, such as a bank, a man suffering from a runny nose customarily wears a bandanna over the lower half of his face.

White people will be offended unless you address them as "Mister Cracker Sir."

Americans are very friendly. Always say hello and shake hands with the man at the urinal next to you.

As a foreigner, you should carry handy maps of several major U.S. cities. Be sure to circle any interesting buildings, tunnels, etc., that you want to see, and print out from the Internet as much detailed information about them as you can.

American farms are all pick-your-own, so just drive in and dive in! This includes beef and dairy farms.

Your country probably has a deep, abiding passion for that goofy sport where people run around kicking a ball and nothing happens. So do we! So come on, talk about it with us all day long -- we just can't get enough!

Hope he's OK ... here are some of his classic quotes 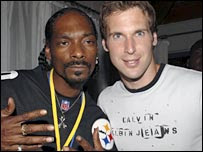 I can't see Man Utd sending Rossi on loan to WBA just to get a back-up keeper ... isn't he supposed to be RvN's replacement ? I'm not too sure about the logic behind him being the solution to their striker problem, but sending him on loan would just be crazy.

Any goal by a naked woman is good ...

but this one is beautiful.