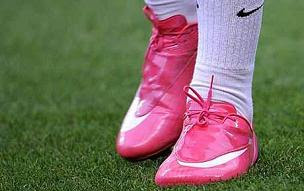 Arsenal forward Nicklas Bendtner thinks he is the Gunners' 'King of Bling' after wearing a shocking pair of pink boots against Dynamo Kiev this week.

"I love my pink boots," said Bendtner.
"I've wanted to play in that colour ever since I was young. The only way anyone at Arsenal can beat me now is to play with diamond-encrusted boots. And I don't think that is going to happen for a few years."
// posted by asteroiderz @ 3:50 pm 0 comments

QPR defender Fitz Hall was given the nickname "One Size" when he was at Oldham.

Arsenal could receive up to £1.5million in compensation for Theo Walcott's injury while on England duty.

Walcott, who dislocated his shoulder in training on Tuesday, is unlikely to play for Arsenal for the next four months, according to Gunners manager Arsene Wenger, who confirmed that surgery had been carried out on the injury.

Wenger said the club have yet to decide whether to pursue compensation when under the FA's insurance deal, Arsenal could claim £50,000 for the first two weeks Walcott is absent, and £100,000 per week thereafter up to a maximum period of almost two years.

If he is out for the predicted 16 weeks, that could mean £1.5million in compensation.

Wenger bemoaned the injury to one of his brightest stars but said he accepted its accidental nature. "I'm disappointed because he is an important part of the squad, but that could have happened in training here," he said

"It was an accident that could have happened anywhere. I do not blame the FA for that. It was accidental in training and I accept that. In a moment like that you do not think about compensation you think about how you can replace the player."

An FA spokesman said: "The FA is one of only a handful of national associations who voluntarily insure our players against injury while on international duty. Almost all foreign international players who play for English clubs will not have been insured in this way. 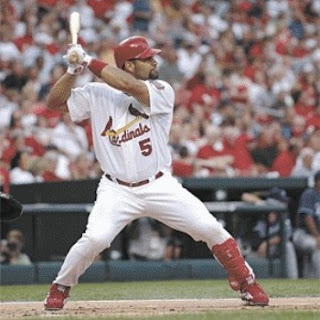 Cardinals first baseman Albert Pujols is adding his star power to a group working to bring an MLS expansion team to the area.

The announcement on Tuesday comes a day after Pujols won his second NL MVP award.
Pujols' reputation, plus a significant financial investment that was not disclosed, is expected to boost St. Louis' chances of winning a franchise in 2011.
"I am very proud and excited to join the effort to bring Major League Soccer to the St. Louis area," Pujols said in a statement.
"This means a lot to me and my family, as we all love soccer and we believe in MLS."
// posted by asteroiderz @ 5:32 pm 0 comments

Kiki Musampa responded to the name of "Chris" at Manchester City.

Fans attack their own players

There was also a pitch invasion in Peru this weekend, where Universitario supporters attempted to attack their own players after they conceded a late equaliser in a 1-1 draw at Atletico Minero

Around 100 supporters ran onto the field and attempted to attack the players.

The fans also insulted the team and demanded the resignation of coach Ricardo Gareca.

The players left the field under police protection, went straight onto the team bus and headed for Lima, a journey of around four hours, without having a shower.

Nearly 70 fans of an Argentine football club have been charged after two buses were hijacked at knife point to get to their team's game on time, police said.

Supporters of second-division team Chacarita Juniors robbed several of the passengers and forced them off the public buses, a police spokesman said.

The fans missed the game, however, as they were arrested before they arrived at the stadium in Buenos Aires.

Police stopped the two buses and arrested the fans on their way to the game after noticing something unusual about them, police spokesman Carlos Durante said.

Two of the fans remained in custody on Friday morning.

Paul Gascoigne is set for a shock football comeback, playing in next season’s FA Cup.

Gazza, 41, is being lined up to appear in a team made up entirely of former Cup winners. He will join a host of former aces in a non-league side which will be entered for the game’s most coveted trophy.

A source said: "No-one will ever have seen the like of this. A team of former winners will run onto the pitch to play a team of no-hopers who won’t know what’s hit them.

"If Gazza’s fit he’s likely to be involved."

The idea is the legends will sit out the club’s league games, taking to the pitch only in the FA Cup first preliminary round.

The men planning the coup are talking to several clubs - including Sheffield FC, the world’s oldest side - to allow them to take over their team for cup games.

If Gazza’s side wins its opening match, the all-stars would continue to appear through the qualifying rounds, aiming to make the first round next November.

The games involving the stars are likely to draw huge crowds, and would raise cash for charities such as the Bobby Moore Fund for Cancer Research UK.

Chelsea striker Didier Drogba has issued an apology for throwing a coin back into the crowd during their Carling Cup defeat by Championship side Burnley.

But he could still be subject to an investigation by the Football Association over the incident.

Drogba was handed a yellow card when he was seen throwing the coin back into the crowd after putting Chelsea in front in the 27th minute.

A spokesman for Chelsea said: ''We will deal with this in the usual way. We are aware there is an incident. But we will not discuss it further until we have seen the referee's report.'' 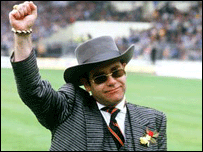 He has grown disillusioned with the running of the club - or at least his perception of its running - by Graham Simpson, the chairman, and issued a terse statement to that effect last month.

In it, John said: "As a lifelong fan and former chairman, I feel I must express my deep dismay about what is happening at the club. There is a danger of it plummeting into freefall - I fear we could be facing that catastrophe."

John’s dismay deepened as Watford’s plight near the foot of the Championship worsened after a run of only two wins in 11 league matches.

That sequence culminated in the departure of Adrian Boothroyd, the manager and a close friend of John, by mutual consent on Monday, and the issuing of a statement on the singer’s personal website.

"Elton affirmed that he would always be a fan of Watford," it said.

"He wishes the team every success for the future. However, in the light of developments over the past few months, he feels he cannot remain in any formal position within the club."

West Ham have invited US President-elect Barack Obama to watch his 'favourite team' in action.

Obama, who this week became the first black man to be elected to the Presidency, visited Upton Park in 2003 while visiting his half-sister in London and has been claimed as a celebrity fan by the Hammers.

West Ham director Mike Lee said: "We are very proud of what Barack Obama has achieved and respect what he has done.

"We plan to send him a letter of congratulations and invite him to come to a game at Upton Park the next time he is in London."

Former England star Paul Gascoigne has been given nine weeks' breathing space to file his late tax returns and fend off a bankruptcy petition by Revenue and Customs.

Gascoigne has not filed any returns for the past two years and the taxman is petitioning on the basis of an estimated £200,000 liability.

At London Bankruptcy Court on Thursday the case was adjourned until January 9 with the Revenue's agreement.

Gascoigne did not attend the hearing and outside court Mr Montgomery stressed: "There is no suggestion that he doesn't have the funds to meet his tax liabilities. It is just a question of having time to make the returns. It takes time to work out where everything is." 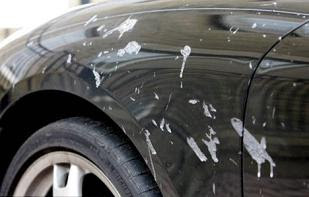 Premiership referee Mark Clattenburg's ex-girlfriend has been arrested on suspicion of trashing his luxury sports car.
His Porsche Boxster, worth £40,000, was vandalised outside a flat he owns in Gosforth, Newcastle, in August.
A corrosive substance was splattered on the side of the vehicle, which has a private registration, causing thousands of pounds of damage.
Now, it has emerged his former lover and business partner Susan Clegg has been arrested by Northumbria Police in connection with the incident.
The 35-year-old, of Gateshead, is helping police with their inquiries and must answer bail later this month, when she could face charges.
It comes just weeks after the pair appeared in court together over alleged business debts to former associate John Richardson.
// posted by asteroiderz @ 2:39 pm 0 comments

Player hit by a rocket 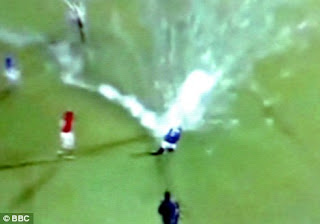 A football player was hit by a firework launched by opposition fans moments after the whistle was blown at the end of a cup final match last night.

Conor Hagan fell to the ground after being struck in the back by the rocket before it exploded.
His team Linfield had just suffered a 2-1 defeat by sectarian rivals Cliftonville in the County Antrim Shield final at Windsor Park in Belfast.
The attack, which sparked riots afterwards, came as players for Cliftonville, a largely Catholic-supported side, had missiles thrown at them by fans of the losing side, which is typically followed by protestants in the divided city.
Hagan, 26, was tended by team medics and members of both sides before being able to regain his feet.
// posted by asteroiderz @ 5:23 pm 0 comments 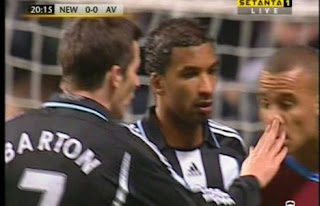 Aston Villa are examining television pictures to establish if Gabriel Agbonlahor was racially abused by Newcastle’s Joey Barton on Monday.

Although referee Steve Bennett failed to mention any incident - and the FA confirmed last night that nothing was included in his official report - Villa are reviewing the footage.

The complaint may depend on whether Agbonlahor wants to take the matter further.

Villa are aware of the storm it would cause if they demanded action without any firm evidence to support their case.

Then it could be the word of one player against another.

An FA spokesman said: ‘We are aware of the rumours and have had a number of calls on the subject. We take seriously any allegations of racist abuse and will act accordingly if we receive any official complaint from Villa.’

The barber responsible for Wayne Rooney's new shaven-headed look has been revealed as his Manchester United team-mate Rio Ferdinand.

The central defender got the clippers out after Rooney got sick of jibes about his thinning hair.
// posted by asteroiderz @ 8:54 pm 1 comments