With those arms, he'd make a good goalkeeper 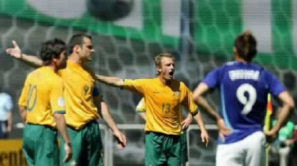 David Beckham has started his three-month loan period with AC Milan under armed guard as the team travelled to Dubai to prepare for a friendly against Hamburg.
Beckham, whose work ethic was praised by AC captain Paolo Maldini, trained with around 50 armed guards at the Al Nasr sports centre in Dubai.
It is believed the security is second only to that used to protect George W Bush in his trip to the United Arab Emirates last year.
// posted by asteroiderz @ 6:12 pm 0 comments

It was the 1984 European Cup final, and Liverpool and Roma are standing in the tunnel when Joe Fagan tells Sammy Lee it will be his job to mark their playmaker.

"Which one's the playmaker ?" whispers Sammy.

Wayne Rooney was crowned The Club World Cup’s Most Valuable Player, and was presented with a giant car key for his trouble.
// posted by asteroiderz @ 6:29 pm 0 comments

Argentine soccer player Gaston Aguirre killed a pigeon with a single shot - right off his foot.

"I kicked the ball and, poor pigeon," the San Lorenzo defender said.
"Now I will be remembered as the pigeon killer."
Aguirre hit the bird in the 2-1 victory against Tigre in a three-team round-robin for the Argentine league title.
Surrounded by opponents, he kicked the ball toward the goal and in the direction of a group of pigeons on the grass near the corner.
A burst of feathers followed and the pigeons flew away - except one.
Several players surrounded the wounded bird as it tried to fly away but it collapsed.
Referee Saul Laverni then scooped up the dead pigeon and placed it off the field.
// posted by asteroiderz @ 4:19 pm 0 comments

AC Milan midfielder Gennaro Gattuso has long been considered one of the hardest men in football, and we now have scientific proof of that fact.

During surgery on his knee this week, doctors had to switch scalpels to get a sharper blade.

"Gattuso's bones are very hard. It's extraordinary," said Krystel De Reycke, who assisted in the operation in Antwerp.

"We could not break them. It's the first time it has happened to us."

Napoli owner Aurelio De Laurentiis has a message for any of his players who are thinking about defecting to the Premiership:

"The English live badly, eat badly and their women do not wash their genitalia."

Fog on the Thai 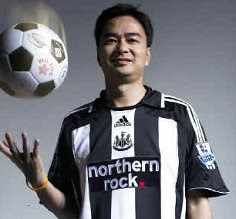 New Prime Minister of Thailand, Abhisit Vejjajiva, or Mark to his mates, was actually born on Tyneside in 1964.

His parents were living in the area at that time, and were attached to the medical school of Newcastle University, later sending their son to both Eton and Oxford.

He is a lifelong fan of Newcastle United.

A fan has got one over his arch rivals by paving his team’s nickname outside their stadium.

The Birmingham City supporter spelt "Blues" in dark-coloured bricks at Wolverhampton Wanderers’ ground.
And the stunt went unnoticed for at least four years.
The West Midlands club have now replaced the brickwork, but fans saw the funny side.
Wolves spokesman Matt Grayson said: "It won’t be a big surprise to any of our fans that we walked over the opposition at Molineux."
// posted by asteroiderz @ 4:21 pm 0 comments

The Argentine Football Association is to introduce an aerosol spray to stop defenders creeping closer to the ball during a free-kick.

From next year, referees will use the spray in first division matches.

Referees will mark a temporary white line 9.15 metres (10 yards) from the ball, which defenders cannot cross. The spray will disappear 30 seconds later.

Pablo Silva, who invented the spray, got the idea when he failed to score with a free-kick at an amateur match.

"In the 88th minute, we were losing 1-0 and won a free-kick on the edge of the area. When I took the kick, the wall was three metres away," he told Reuters earlier this year.

"The referee didn't book anyone and didn't do anything," he said.

"We lost the game, and driving home later, with a mixture of anger and bitterness, I thought that we must invent something to stop this." 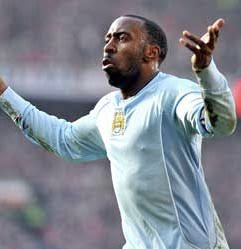 Manchester City striker Darius Vassell was robbed as he returned home from the club's Christmas party.
The 28-year-old had his designer watch and jewellery stolen by two men as he got out of a taxi in Didsbury in the early hours of Sunday.
It is understood the attackers had not specifically targeted the former England international, but struck while he reportedly disputed his taxi fare.
A Greater Manchester Police spokesperson said: "Police were called following reports of the robbery.
"On arrival they found a 28-year-old man whose watch and jewellery had been stolen.
"He had not been injured during the incident but the offenders had threatened him.
"Inquiries are ongoing."
// posted by asteroiderz @ 5:36 pm 0 comments

When Neil Warnock was manager of Doncaster Rovers, fans nicknamed him Colin.

The reason ?
Take the letters COLIN out of NEIL WARNOCK, then rearrange the remaining letters to make a word.
// posted by asteroiderz @ 5:30 pm 0 comments 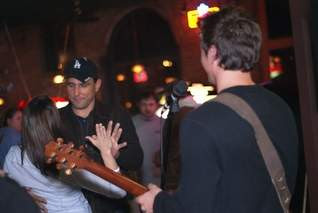 Actor and former football hardman Vinnie Jones has been arrested and charged after a bar fight in the US town of Sioux Falls, South Dakota.
Jones, 43, pictured at the bar about 20 minutes before the altercation, was charged with simple assault and released on bail on Friday.
He was earlier treated in hospital for cuts to his face from a beer glass.
Jesse Bickett, of Montrose, South Dakota, was arrested on charges of aggravated assault for allegedly hitting Jones with a glass.
A police sergeant said Jones allegedly charged at Mr Bickett, who hit him with the glass.

A friend of Mr Bickett said they were playing pool when Jones asked to play, and then seemed to take offence when someone asked if he was "that guy from X-Men".
// posted by asteroiderz @ 5:09 pm 0 comments

Ex-Liverpool hardman Tommy Smith was an uncompromising figure on and off the football pitch, a player who opposition forwards tended to avoid like the plague - and for good reason.
"I did warn players," said Smith.
"When Tottenham striker Jimmy Greaves came out at Anfield one time I handed him a piece of paper.
He said: 'What's this?'
I said: 'Just open it.'
It was the menu from the Liverpool Infirmary."
// posted by asteroiderz @ 10:26 pm 0 comments