A player was attacked as furious Fluminense fans invaded a training session on Tuesday.

Media reports said that shots were fired into the air by security guards and the club said it would investigate, although it added that none of its employees carried guns.

The protest followed back-to-back home defeats, and television pictures showed around 30 supporters running onto the field as the players were training.

One man was seen to aim a punch at midfielder Diguinho who hit back and tried to escape through a side door.

An alcohol ban will come into force in Rome tonight as 30,000 Manchester United fans head to the city for the Champions League final against Barcelona.

The ban, from 11pm right through until 6am on Thursday morning, will cover the Italian capital's centre and the area surrounding the stadium.

Security for the final will be unprecedented with more than 1,500 police and paramilitary carabinieri on duty around the Italian capital and the Stadio Olimpico.

Tickets for the final are electronic chip and are credit card style as opposed to the traditional paper tickets and official ones give access to Rome museums and public transport.

Police officers from Britain will be on patrol in uniform as well as undercover but they will have no powers of arrest and will simply be a point of recognition.

Relegation-haunted north-east trio Newcastle United, Middlesbrough and Sunderland have dismissed claims they could sue Manchester United if they field a weakened team this weekend.

Reports today suggested the three clubs had held discussions as they prepare for a decisive final round of Premier League fixtures on Sunday with the highest of stakes.

Sir Alex Ferguson has already indicated he will use the depth of his squad with nothing but pride at stake for his club. 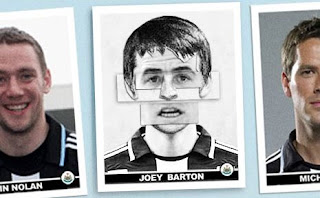 Stoke fans have it licked

Stoke fans will be getting free ice cream tomorrow from the bookmakers who wrote off the club’s chances of staying in the Premier League.

Bookies Paddy Power decided Stoke were relegation fodder after Bolton beat them 3-1 on the opening day of the season and paid out on them going down.

Now, with Stoke safe two games from the end of the season, they have offered their apologies and will provide free ice cream for the final home game against Wigan. 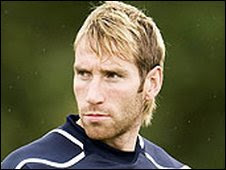 Rangers defender Kirk Broadfoot was taken to hospital after an egg he was microwaving exploded in his face.
The 25-year-old Scotland international was poaching the egg at his home near Mauchline, Ayrshire, when the accident happened.
It is understood hot liquid squirted onto his face and scalded his cheek when he opened the microwave door.
The footballer was treated in hospital, before being allowed to go home following the incident on Sunday.
// posted by asteroiderz @ 2:27 pm 1 comments 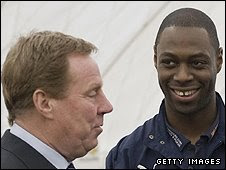 Tottenham manager Harry Redknapp has vowed to introduce an alcohol ban after Ledley King was arrested for an alleged assault outside a London nightclub.

Club captain King was arrested in the early hours of Sunday morning and questioned on suspicion of assaulting another man in Soho.

"I'll implement a strong rule next season that drinking is a no-no here," Redknapp said.

"Footballers should dedicate their lives to playing."

"There's still too much of a drinking culture in English football but it's not as bad as it used to be.

"At Tottenham we do a lot with kids, a lot of them underprivileged.

"We have to set an example. Too much drinking goes on in this country. Too many people are not happy unless they have had a drink."

The biggest unofficial Cristiano Ronaldo Facebook page has been shut down by the site despite having almost three million fans and getting half a million hits every month.

The man behind the page, 25-year-old Kunwar Ali who lives in Pakistan, said that he was devastated at what had happened.

"I used to spend six or seven hours on Facebook every day posting updates about Cristiano and have done for the last year.

"Everything is gone and I now have nothing."

The first Kunwar knew about his page behind shut down was on Monday when a friend told him he couldn't log on.

"I don't know why it was removed. It could be a lot of reasons," he said.

Part of the terms and conditions of signing up to Facebook is that unofficial fan pages aren't allowed.

They read: "Fake Pages and unofficial 'fan pages' are a violation of our terms of use. If you create an unauthorized page or violate our terms in any way, your Facebook account may be disabled."

Otherwise there could have been a problem with copyright issues.

While there were no issues with any text he put on the page, Facebook is strict about rights when it comes to video.

But as soon as Kunwar realised this he removed any videos that were on his page.

"I spoke to a copyright lawyer and he said that I should not share video content, that I should take the videos down. So that is what I did."

He also said he'd been in touch with Ronaldo's representatives in the past.

"I even offered them the chance to take it over, for it to become an official page but they said it wasn't something they were looking at."

There are still dozens of pages set up as a tribute to Ronaldo on Facebook with tens of thousands of fans.

Kunwar added: "I spent one full year of my life on this page and if someone asks me what I did with myself I have nothing. Everything is gone."