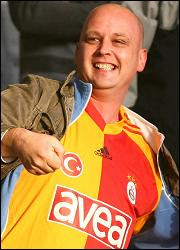 Millwall have vowed to ban for life the fan who taunted Leeds by wearing a Galatasaray shirt.

The Lions are trying to find the yob who also made stabbing gestures to visiting fans during Millwall's 2-1 win on Saturday.

Leeds fans Christopher Loftus and Kevin Speight were knifed to death before a European tie at Galatasaray in 2000.

Despite the sick taunts by a small minority of Millwall fans and a couple of seats thrown by Leeds fans, the powderkeg match at The Den passed off relatively peacefully.

The World Cup qualifier between Mexico and El Salvador had to be temporarily halted when a swarm of bees invaded a goalmouth at the Azteca Stadium.

The match was barely three minutes old when the bees took refuge inside the goalposts at the EL Salvador end.

Play was held up for around six minutes as officials used fire extinguishers to clear the insects.

Mexico went on to win the match 4-1 to secure a place in the 2010 World Cup finals in South Africa.

Maradona calls on God to save Argentina

'The Beard (God) saved me many times, I hope he saves me this time too,' said Maradona.

Argentina are fifth in the South American group, in the berth for a playoff against the team finishing fourth in the CONCACAF region. The top four go through automatically.

They face Peru and Uruguay in their final qualifiers next month, looking to at least remain where they are as they try to avoid missing the finals for the first time since 1970.