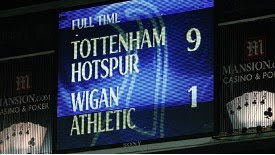 Wigan Athletic's playing staff have offered to reimburse the entrance fees for all supporters who travelled to White Hart Lane to witness their 9-1 destruction at the hands of Tottenham Hotspur on Sunday.

Spurs equalled the record for goals scored in a Premier League game when producing a ruthless second-half performance, with Jermain Defoe scoring five.

After suffering such acute embarrassment, Wigan's players will now personally refund the admission price paid by every Latics supporter who attended the game in North London. 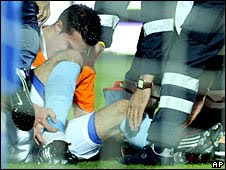 Arsenal striker Robin Van Persie has flown to Serbia for a novel form of treatment - placenta fluid is to be dripped on his injured ankle.

The 26-year-old hurt his ankle while playing for the Dutch national side in a match against Italy.

He was left with torn ankle ligaments after a challenge 10 minutes into the contest.

Scans revealed a partial tear would keep him out of action for six weeks.

But a Dutch journalist close to the national squad said he could be back in as little as four weeks if the treatment works.

Van Persie, speaking before travelling out to eastern Europe on Monday, was hopeful despite being unsure what to expect.

He said: "She is vague about her methods but I know she massages you using fluid from a placenta.

"It cannot hurt and, if it helps, it helps.

"I have been in contact with Arsenal physiotherapists and they have let me do it."

Four Algerian football players were injured when their team bus came under attack from stone throwers as it arrived in Cairo.

Algeria and Egypt play a World Cup qualifying match in Cairo on Saturday.

None of those injured has been named, but one player was sent to hospital for treatment, Algerian radio reported.

A reporter for Algerian radio said that about 200 young people appeared just as the team arrived at a Cairo hotel, and launched a hail of stones at the bus.

Hachemi Djiar, the Algerian sports minister is reported to have described the incident as "very regrettable".

He said officials from Fifa, international football's governing body, were aware of the incident and were meeting to decide what action to take.

Egyptian and Algerian officials have been trying to calm tension ahead of the match.

The teams have an intense rivalry that goes back decades.

The last time they met in a major tournament in 1989, the match was followed by riots.

He was taken to hospital after his BMW bike was involved in a collision with a car in Walthamstow at about 1030 GMT.

He has fractured his wrists and injured his pelvis but a spokesman for the north London club said they were still waiting for hospital test results.

The Italian, 36, signed from London rivals Chelsea in January this year.

The female driver and a child passenger walked away from the Ford Fiesta Cudicini was in collision with and did not need hospital treatment. 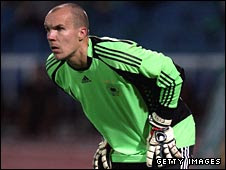 Germany and Hannover 96 goalkeeper Robert Enke has died after being hit by a train in an apparent suicide, police have confirmed.

Enke, 32, was fatally injured at a level crossing northwest of Hannover.

The German football federation (DFB) said in a statement: "The German team has learned of the death of Robert Enke with great shock."

Germany team manager Oliver Bierhoff added: "We are in a state of shock. It is beyond words."

Enke's daughter Lara died in 2006 of a rare heart condition when she was just two. He leaves behind his wife, Teresa, and an eight-month-old daughter the couple had adopted in May.

German police released a statement saying: "The victim is apparently national team goalkeeper Robert Enke from Hannover 96. The first police indications are that it was a suicide."

Bedford magistrates granted him bail on the condition he has no contact with 28-year-old Ms Davenport.

He is due back before the court in January, when the case is expected to be committed to crown court for trial.

The assault is alleged to have taken place at an address in Kempston, near Bedford.

Ms Davenport's boyfriend Worrell Whitehurst, 25, of Finsley Walk, Derby, has already appeared in court charged with attacking the central defender as well as his mother, 49-year-old Kim Stupple, in the driveway of her home in Springfield Avenue, later that day. 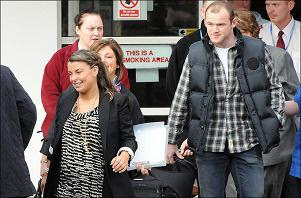 The unusual name given to the newborn son of Wayne Rooney was picked by the Manchester United striker's wife Coleen.

Kai, the 68th most popular name for baby boys in the UK, has several different meanings around the world.

In Burma it means unbreakable, in Nigeria it can mean love, in Japan it translates as the ocean and in Chinese Mandarin it means victory.

In ancient Persian it means Great King and in Scandinavia it can mean keeper of the keys.