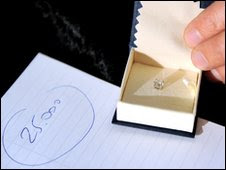 The unidentified woman who bought the item at the sale in the northern city of Bolzano said simply that she was satisfied with her purchase.

The money will go towards paying off some of the Argentine football legend's 37m-euro (£33m) Italian tax debt.

Gunmen have fired on a bus carrying Togo's football team to the Africa Cup of Nations in Angola, wounding players and reportedly killing the driver.

The attackers machine-gunned the vehicle after it crossed from the Republic of Congo into Angola's oil-rich territory of Cabinda.

The government called the incident an "act of terrorism".

Rebels who have been fighting for the region's independence later said they had carried out the attack.

The Front for the Liberation of the Enclave of Cabinda (Flec) has fought for independence for several decades, but entered a ceasefire in 2006. 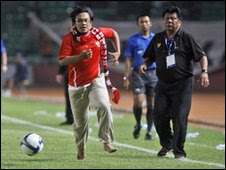 An Indonesia football fan became so fed up with his national team's lacklustre performance that he invaded the pitch and tried to score a goal.

Hendri Mulyadi, 25, took matters into his own hands as his team were heading for a 1-2 defeat against Oman.

He sprinted onto the pitch, got control of the ball and ran down the wing, but his attempt to score ended in failure after Oman's keeper blocked the shot.

Police eventually overpowered him and he later apologised on a website.