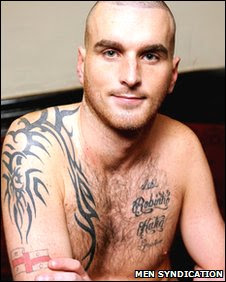 Robinho's departure from Manchester has left one man feeling particularly blue - die-hard fan Chris Atkinson has the Brazilian's name tattooed on his chest.

And to make matters worse the tribute is etched next to another Samba star who never even signed for the club.

Mr Atkinson, 26, of Altrincham, got a Kaka tattoo soon after the Blues lodged a £100m bid - only for him to sign for Real Madrid.

"I got the Kaka tattoo and got quoted saying I'd get Robinho done next," said Mr Atkinson.