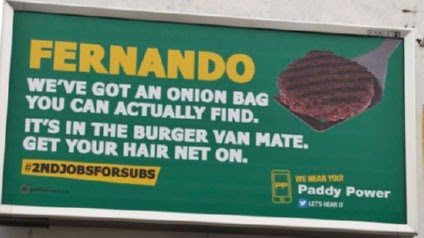 The bookmakers have used a giant billboard site directly across the road from Stamford Bridge to point £50million goal-shy striker Fernando Torres towards a job cooking burgers. 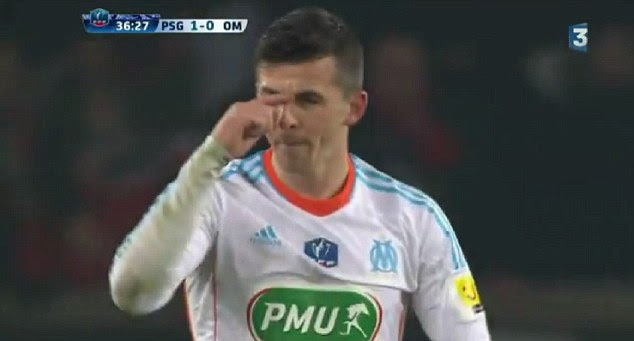 Joey Barton is no stranger to controversy and arguments and his latest spat was with Paris Saint-Germain striker Zlatan Ibrahimovic.

Barton and Ibrahimovic came up against each other for the second time this week in the French Cup clash between PSG and Marseille in Paris.

Barton and Ibrahimovic clashed when the Sweden striker beat Barton to a header and the Marseille midfielder responded by telling Ibra he had a big nose.

A group of Twitter-based Manchester United fans are hoping to raise enough money to help one of the richest football clubs on the planet buy back Cristiano Ronaldo from Real Madrid by coaxing millions of fellow supporters into donating one pound to put toward the transfer.

Ronaldo left United for Madrid for the princely sum of £80 million in 2009 and reportedly has a buy-out clause in his contract (which runs out in two-and-a-half years) of €1 billion, yet still the fans in question are hoping that their #poundforCR7 hashtag campaign will raise enough money. 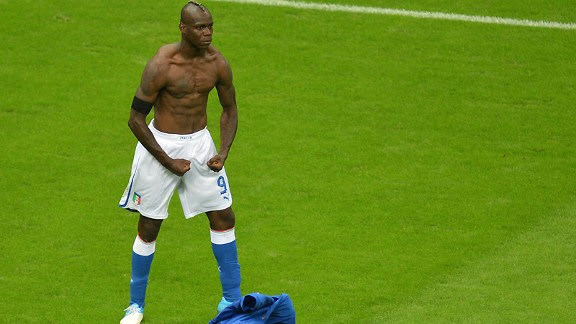 Mario Balotelli has commissioned a bronze sculpture to be made of himself in the 'power flex' mode he went into after scoring against Germany at Euro 2012.

According to Football Italia, artist Livio Scarpella, who is based in Balotelli's hometown of Brescia, has been approached by the Milan forward to immortalise his famous pose in platinum and bronze. 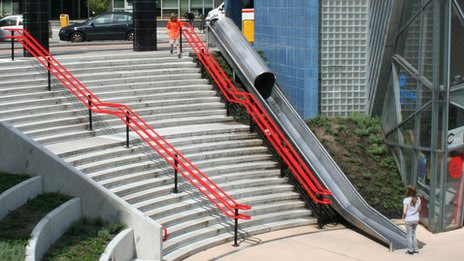 According to BBC News Tyne & Wear, Newcastle United are toying with the idea of building adult-sized slides outside St James' Park in a bid to ease the congestion caused by fans leaving the stadium on matchdays.

Several thousand alcoholically lubricated Geordies and a couple of huge metal slides outside the ground?

What could possibly go wrong ? 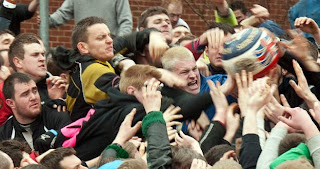 England’s Royal Shrovetide Football Match has been played over two days every year since at least 1667, the match involves the entire town of Ashbourne in Derbyshire (population 9,000) aiming to move a specially-designed leather ball that’s a bit bigger than a standard European football through the streets, to one of two goals north and south of the town centre.

Regardless of where in town they live at the time of the match, residents play for a specific team based on their birthplace; those born north of Henmore Brook, the river that splits the town, are known as Up'ards and must goal the ball in the old Sturston Mill while those born to the south are called the Down'ards and score at the old Clifton Mill. The game starts at 2 pm on Shrove Tuesday (known as Mardi Gras in other parts of the world) with a guest of honour throwing the ball to the crowd from a raised brick structure in the town centre known as the "plinth", specially created for the annual matches.

The ball then moves around the town by a large group of players known as a "hug", similar to a scrum in rugby in that the large groups from both teams push against each other to try to move the ball. Because of the large crowd, the ball is rarely kicked, but it is legal to do so, as well as throw and carry it, though the ball cannot be moved via motor vehicle.

Since there are few other rules, shops board up their storefronts the event and most people park their cars far from town.

If players score a goal before 5 pm on Shrove Tuesday, the first ball is retired and a new ball is put into play. Otherwise, the day ends after the first goal or at 10 pm if neither team has scored. The match resumes the next day at 2 pm, following the same timeline. Any player who scores a goal gets to keep the hand-painted ball, which carries a new design each year.

This year’s game starts on 12 February. Visitors to Ashbourne are welcome to play or just follow the ball as it makes its way around town, but the honour of goaling - scoring by hitting the designated structure of each mill three times - usually goes to a well-known and well-practiced local. 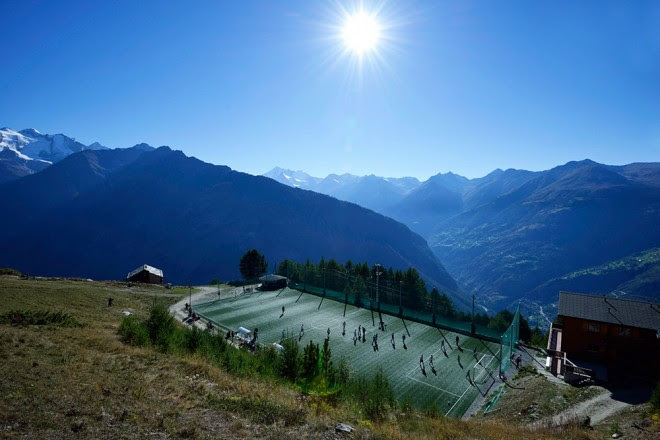 Ottmar Hitzfeld stadium is carved into a mountainside 2,000 meters (6,561 feet) above sea level, so when a ball goes over the protective netting - something that happens seven to 10 times per game - it’s a looooooong way down to retrieve it.

"We lose a lot of balls," striker Lucas Furrer says.