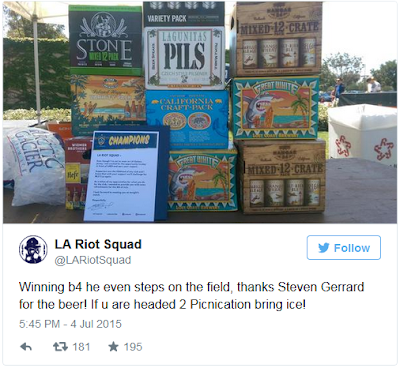 Steven Gerrard was officially unveiled as an L.A. Galaxy player during the interval of his new side's 4-0 win over Toronto FC on Saturday.

However, unable to wow the Galaxy faithful on the pitch for another two weeks while he waits to make his debut, Gerrard embarked on an altogether different, more direct charm offensive before his halftime introduction - he treated each of the three main Galaxy supporters' groups to a mountain of complimentary beer before the match.

Radamel Falcao has agreed to take a 50 per cent wage cut for the chance to prove he is not a Premier League flop.

The Colombian’s season-long loan move to Chelsea was ratified on Friday, giving the striker an opportunity to become a hit in England following his failed spell at Manchester United last season.