Player forced to wear a dress 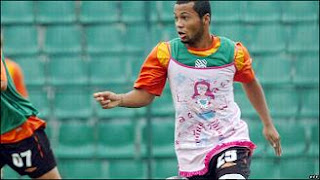 Brazilian midfielder Jairo, who plays for Figueirense, was made to wear a fetching little number as part of a new forfeit scheme to punish out-of-form players.
Apparently the ploy worked and Jairo had his best game for ages in the club's next fixture.
// posted by asteroiderz @ 3:47 pm 0 comments

A bookmaker has dropped gambling addict and former Arsenal star Paul Merson from its advertising campaign.

Ian Hogg, managing director of Better, said the decision was made after the firm received "lots" of complaints.

Mr Hogg told the show that he had responded to criticism of the move.

But Mr Hogg stressed that he retained a good relationship with Merson.

"We like Paul a lot," he said. "I wouldn't want it to be seen in any way that we didn't want to work with Paul."

He said it was possible the firm would work with Merson over publicising an "anti problem-gambling message".

Nairobi's Standard newspaper reported on Thursday that officials will have to go out and purchase replica jerseys from the shops after three sets of uniforms and 2,000 soccer balls went missing from the Kenyan soccer association's stock.

Kenya host Tunisia in Nairobi on Saturday as the final phase of Africa's qualifiers for the 2010 World Cup finals begins.

Football Kenya's technical director Patrick Naggi told the newspaper there was no time to order a new set of kit from the team's sponsors and there was no option but to buy from the shops. 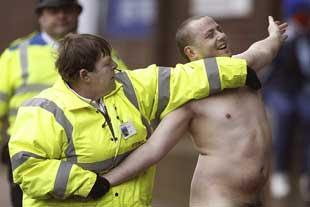 Shocked football fans got more than they bargained for at Gigg Lane recently when a male streaker charged on to the pitch during Bury’s home game against local rivals Rochdale.

The naked fan only made it a couple of yards on to the pitch when he was tackled by a female steward, who grabbed hold of him by the neck and led him away.

The man’s modesty was then covered up and he was carted off by police.

Rochdale fan, Jan Harwood, said: "He was the worst streaker ever.

"It was hilarious, but I felt a bit sorry for him. It was a very cold day."

This guy must be huge

An Iraqi soccer fan shot dead a player of the opposing team as he tried to score an equalizing goal in the final minutes of a match.

The shooting on Saturday in Hilla, 100 km (60 miles) south of Baghdad, during a match between local teams, underscored the country's propensity to lawlessness even as violence by militant groups falls to lows not seen since mid-2003. 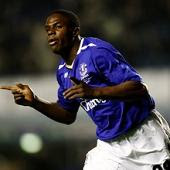 Everton striker Victor Anichebe was challenged by police looking for a gang of robbers, as he looked in a jeweller's window with a friend.
The innocent Everton player, who was wearing a leg cast after surgery, is now demanding an apology.
Cheshire police said they acted because there had been a series of violent robberies in the area.
During a "heated dialogue" between the two men and officers in Knutsford, Anichebe's friend was handcuffed.
// posted by asteroiderz @ 2:41 pm 0 comments

Brazilian striker Ronaldo came through his first competitive game for 13 months in one piece, but was injured by a microphone as he left the pitch.

The 32-year-old made his debut for Corinthians as a 68th-minute substitute in the 2-0 win over Itumbiara.

But Ronaldo was left with a badly bruised and swollen right eye after being struck by a microphone when a post-match media scrum surrounded him.

"We have done a lot of research into the way each player is going to put their penalty," said Foster.

"We went into the shoot-out as well prepared as possible.

"We have had things to look at over the last couple of days and before the shoot-out, you can see me looking at an iPod with Eric Steele.

"It had actual video on it and showed where players put things."

He added: "Eric brought it when he came to the club. I have never seen anything like it. It is a fantastic tool for us."

The FA said it had no problem with the use of such technology and the laws of the game. 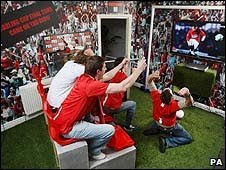 A Manchester United fan has recreated Wembley Stadium in his front room because he failed to get tickets to see the team in the Carling Cup final.

Phil Spark's Didsbury home now has a turnstile on the door, fake turf on the floor, stadium seats, crowd pictures on the walls and a pie heater.

The 25-year-old and his friends will watch Sunday's game against Tottenham on a big screen in the mock stadium.

He said: "This is the next best thing to being there.

"I was gutted when I couldn't get a ticket for the game but I've spent the last few weeks making sure I won't miss any of the action or atmosphere," Mr Sparks, a surveyor, said.

"I may even charge my mates to come round for the best view in Didsbury."