CONCACAF have rescheduled the second leg of the Champions League final between Mexican duo Atlante and Cruz Azul and cancelled the remainder of the confederation's Under-17 Championship.

Due to the outbreak of swine flu in Mexico, the general secretary of the confederation, Chuck Blazer, announced earlier the Champions League final that was due to take place on Wednesday will be delayed until May 12.

CONCACAF have also terminated the Under-17 Championship that served as a qualifier to the Under-17 World Cup in Nigeria.

However, as the tournament's regulations state the semi-finalists qualify for the World Cup, the governing body decided to stop the championship, which was being played in Tijuana.

The CONCACAF Beach Championship in Puerto Vallarta, which was scheduled to be played from Wednesday to Sunday, is under review, with a final decision expected on Tuesday.

Rio Ferdinand was left a quivering wreck after talking to his all-time music hero Michael Jackson this week.

Ferdinand took a trans-Atlantic call from Jackson at the launch of his online magazine when the King of Pop rang up to wish him luck for his new venture.

"That surprised even myself! Michael Jackson on the other end of the line, telling me that he can't wait to meet me and inviting me to one of his shows," said Rio.

"I was shaking afterwards, I couldn't believe it - he's always been a hero of mine.

"A friend of mine helps manage him in England and it's been set up through that. He signed a shirt for me the other day, he's invited me to come and meet him backstage after a show. It's mind boggling.

A Chinese principal has admitted that the school football team which won an international contest was stuffed with national squad players.

Only three of the players actually attended Daping high school for girls in the south-western city of Chongqing, Chinese media said.

Principal Zhang Jianling has now made a public apology for the scandal.

The team won the trophy 12 days ago, beating a German team in the final. Officials say they will hand it back.

According to International School Sport Federation rules, all players taking part in the tournament must be enrolled at the school they are representing.

Reports said the team had been stacked with players from the national youth team and other top teams. 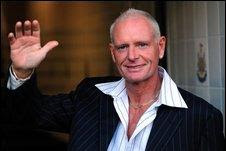 Football legend Paul Gascoigne is to take to the pitch to help raise funds for cash-strapped Darlington Football Club.
The former Newcastle and England star has agreed to take part in a match to support the League Two club, which went into administration in February.
Gascoigne will join former stars from Newcastle, Sunderland and Middlesbrough on 3 May.
Fans will also be given the chance play alongside the stars, with five places being sold to the highest bidder.
// posted by asteroiderz @ 6:21 pm 0 comments

North Korea coach Kim Jong Hun made the allegation after his team lost 1-0 to South Korea on 1 April. Seoul has denied the claim.

The North's football association said the act was part of Seoul's "moves for confrontation" with Pyongyang.

In a statement about the match, the North's football association said:

"It was beyond all doubt that the incident was a product of a deliberate act perpetrated by adulterated foodstuff as [the players] could not get up all of a sudden just before the match."

A referee ordered a penalty to be retaken in a Sunday league football game when an opposition player broke wind as the ball was kicked.

The Chorlton Villa player got a yellow card for the noise which was classed as "ungentlemanly conduct".

The team, who conceded a goal on the second take, went on to win the match 6-4 against International Manchester FC at Turn Moss in Stretford, Manchester.

"One of our players 'broke wind' and only the referee heard it and he booked the player," he said.

"The other player had the penalty saved because it was a bad penalty; it was nothing to do with any noise. They were as shocked as we were as to why."

Mr Treadwell said he was waiting for the Football Association to contact them after it had received a report.

England and Chelsea captain John Terry's mother and mother-in-law were both arrested last week for shoplifting.

Sue Terry, 50, and Sue Poole, 54, were held on suspicion of theft, accused of stealing food and clothing worth £800 from Tesco and Marks and Spencer.

The pair were caught loading the goods into a car at the Brooklands shopping centre in Weybridge.

Security guards called police at 3pm on Wednesday and the women were taken to Staines police station where they accepted a police caution - meaning they formally acknowledged their guilt but that no further action was taken against them.

The incident is hugely embarrassing for the footballer, who earns £135,000 a week and has bought detached homes for both his mother and mother-in-law in the same street in which he also lives.

Peter Crouch says Rio Ferdinand was the reason behind his robotic goal celebration during England's 2-1 win over Ukraine at Wembley.

The Portsmouth striker vowed never to perform the dance at Wembley again, but did when Ferdinand shouted at him "to pull the rope".
He was apeing a spoof sketch on Comic Relief by actor James Corden, who played a football-mad plumber.
In the sketch, Cordon's plumber stumbled upon a group of England players at their pre-match training camp and dishes out advice to all and sundry.
He told Crouch to abandon the robot move and do a "pull-the-rope" mime dance instead.
// posted by asteroiderz @ 4:09 pm 5 comments

That equals a European record as Hungary went that number without defeat between 1950 and 1954.