Header scored from own half

The Russian wife of League One Bournemouth’s part-owner Maxim Demin stormed into the dressing room at half time to deliver a pep talk on Saturday.

Already losing 1-0, Bournemouth players sat shocked as Irena Demin demanding a second-half improvement. They went on to lose to MK Dons by the same score but Demin’s coowner, chairman and property developer Eddie Mitchell, defended her.

He said: ‘She, her husband and I have put a lot of energy and money into the club and she was entitled in my view to express an opinion.

‘People who are responsible for the money are entitled to voice an opinion. She felt frustrated, we all felt frustrated, but she felt her opinions and that frustration should filter down to the players.

'Manager Lee Bradbury has our support 120 per cent — he will probably not pick me for the bench next week after this — but it was fun.’

Valencia midfielder Éver Banega filled his car with petrol and went into the shop to pay.

There was just one problem: he'd left the handbrake off. When he came out, his car was rolling away. So he tried to stop it the way a footballer stops a ball -- with his foot.

The car crushed his ankle, breaking his fibula. Banega was operated on and although the operation was a success, he will be about of action for six months.

Let's be honest: at first it was funny. But when the news hit, you just felt desperately sorry for him. Six months, for goodness' sake. And all because he forgot to leave the handbrake on.

Steve Kean hires bodyguard to protect him from fans

Under-fire Blackburn manager Steve Kean has had to hire a bodyguard to protect him from Rovers hooligans, although he admits his minder doubles up as a pretty good buddy.

The Ewood Park boss has faced intense criticism from sections of home support since the start of the season, and Kean has revealed the constant protests against his management has had an impact on his everyday life.

‘I was advised that it would be in my interest to have somebody with me at all times,’ he said.

‘I was at a restaurant with my wife and children a few months ago and got a text message from a friend telling me to be careful.

‘There was stuff going out on Twitter from an activist group which identified the restaurant so that people could confront me.’

However, despite having to take the unenviable step of hiring personal security, Kean revealed there’s an upside of having round-the-clock company.

‘The chap who protects me is a seventh dan in karate, but he is not big or butch or anything. He knows how to handle himself.

‘It is a bit strange having him around, but there are some good things too. He is bloody interesting to talk to, for a start.’

Neymar gets 'caked' by Santos pals after reaching 100 career goals 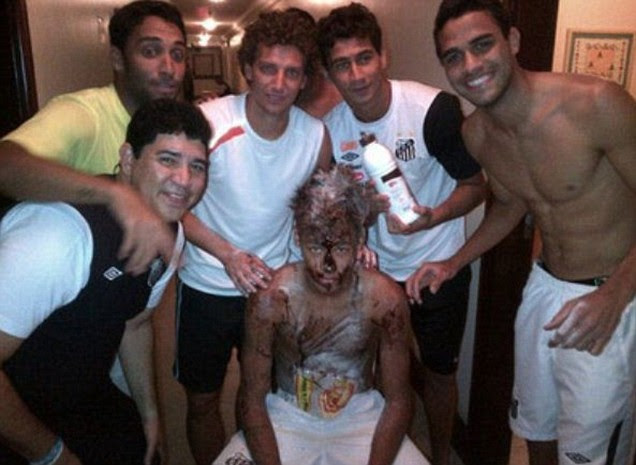 Brazilian star Neymar recently notched the 100th goal of his career on his 20th birthday, but instead of presenting him with a celebratory cake, his Santos buddies decided to turn him into one.

The exceptional forward must have known he’d be in for some kind of treat when he headed in his landmark effort, but presumably wasn’t expecting to be dosed in lashing of flour and chocolate sauce.

However, although the day turned out to be bittersweet for Neymar after Santos surrendered their one-goal advantage and eventually lost 2-1 to Palmeiras, there remains little doubt that the newest member of the 100-club is destined for the very top of the world’s game. 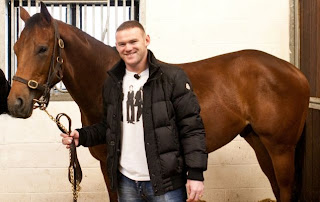 The Manchester United man's first-choice name for the two-year-old was Oceans Seven, but after finding out the name was unavailable, the striker soon settled on Switcharooney.

Within minutes of the announcement the horse had its own Twitter page.

The nag opened its account with: 'Hi everyone. Follow me and you'll be the first to know when I'm entered for a race by my trainer @TomDascombe. Looking forward to it!' 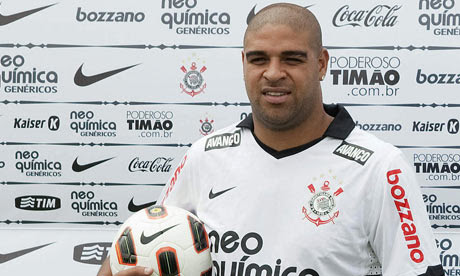 The Brazilian club Corinthians are keeping their striker Adriano "detained" inside the team's hotel in an effort to force him to lose weight.

The club said Adriano, who has been fined several times for missing training, would be put on a strict diet inside the hotel at the team's headquarters, eating only what doctors give him and training three times a day.

The Corinthians fitness trainer Fabio Mahseredjian said the team chose to detain the former Internazionale striker because he has failed to improve his physical condition. He has played rarely since recovering from surgery on his achilles tendon last year and is in danger of not being included in the squad for the Copa Libertadores. 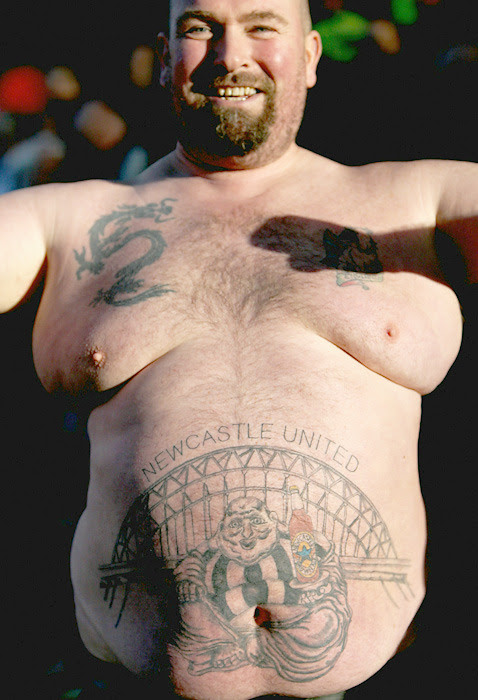 I'm guessing he'll have his shirt off at Tottenham tomorrow. 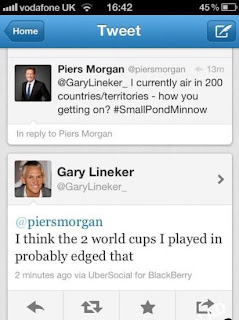 One supporters’ group is urging their fellow Gooners to put black bin liners over empty red seats at the Emirates during Saturday's match against Blackburn to highlight falling attendances.

Manager Wenger has seen his side slip to seventh in the table after taking just one point from their last four games, and there have been Twitter and Facebook calls for the bin-bag protest plus chants of “we want our money back” during this weekend's lunch-time clash.

Fan delays Premier League match after handcuffing himself to post 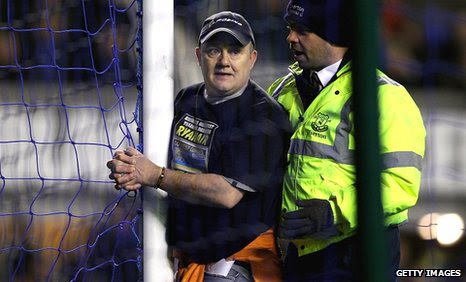 Play was delayed in Everton's meeting with Manchester City at Goodison Park after a spectator invaded the pitch and handcuffed himself to a goalpost.

The man emerged from the crowd before half-time and attached himself to the frame of City keeper Joe Hart's goal.

After a hold-up which resulted in five minutes of first-half stoppage time, he was released and led away by police.

"He was arrested by Merseyside Police, who are now dealing with the matter," Everton said in statement.

"It transpired that the supporter is a known professional protester, allegedly protesting about an airline's recruitment policy.

"Bolt-cutters were used to remove the offender, who was roundly booed as he was escorted from the ground."