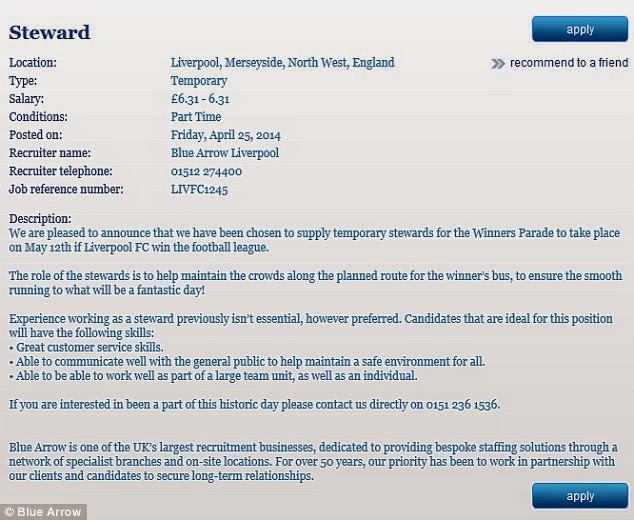 GIF : Aspas takes one of the worst corners ever 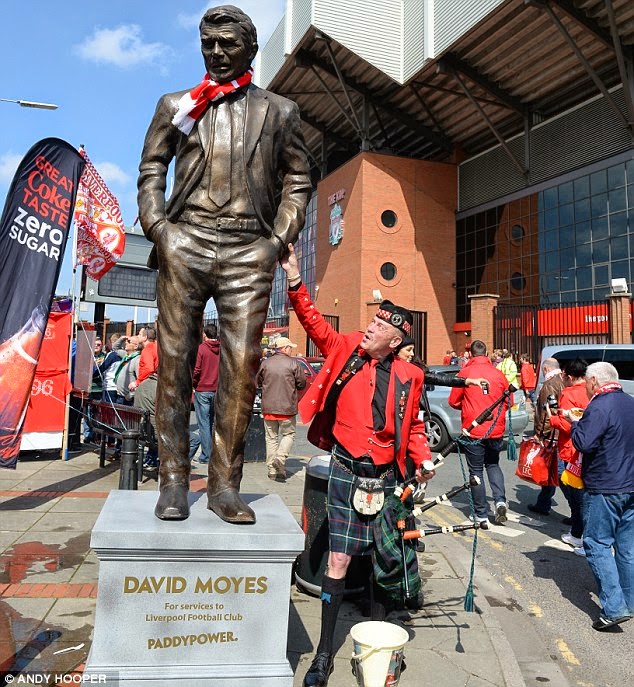 Axed Manchester United boss David Moyes will make a shock appearance at Anfield on Sunday, but not in the way you might expect.

Paddy Power have unveiled a statue of the Scot, for 'his services to Liverpool Football Club'.

The publicity stunt comes a week after a man dressed as the Grim Reaper sat behind Moyes at Goodison Park in his last game as manager.

PFA Team of the Year 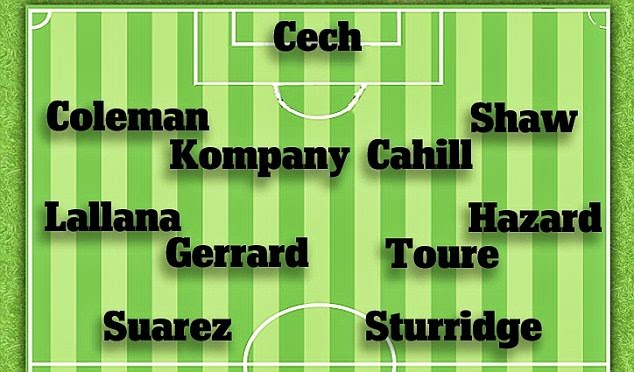 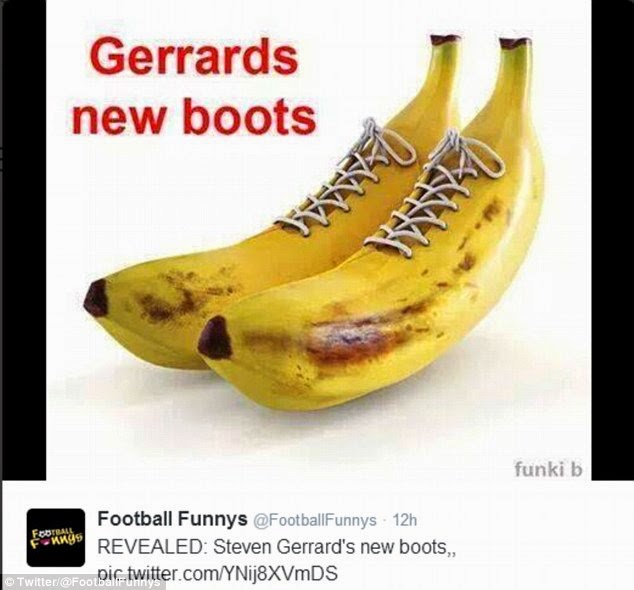 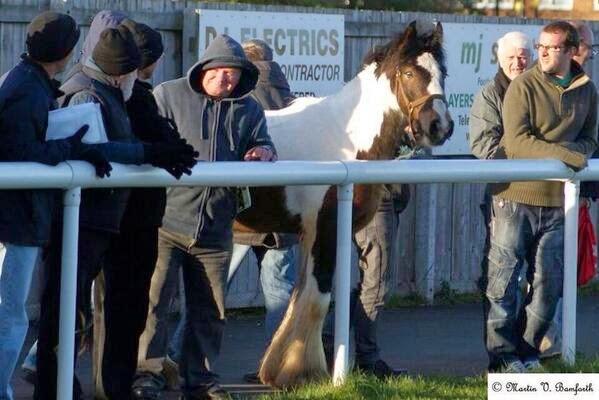 Non-league side Ashington AFC are currently having a mare in a very literal sense after finding several of their recent home games gate-crashed by a horse.

According to the Metro, no-one at the club quite knows who the nag belongs to, but it routinely makes its way down to their Portland Park home ground to watch the team in action by exploiting a gap in the fence around its field .

Having reportedly been spotted at a couple of previous games, the horse attended last weekend’s outing against Crook Town, and boy did he pick the right game to watch - as Ashington went on to rack up a thoroughly entertaining 7-3 victory.

Martin Bamforth, the fan responsible for taking the photo above, told local press that the horse was ‘the oddest thing he’d ever seen’, before adding that the official match attendance was announced during the latter stages of the game as “597 – plus a horse!”. 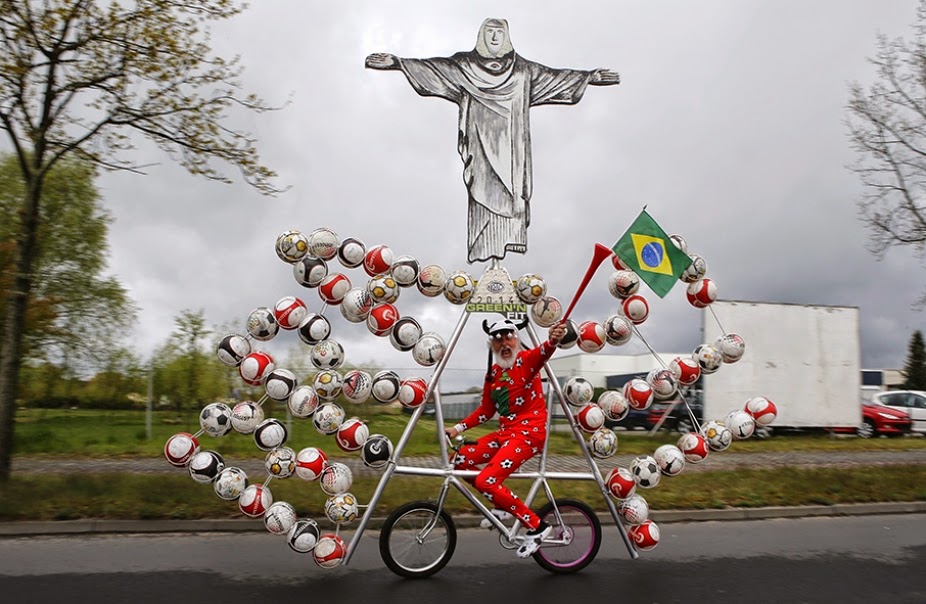 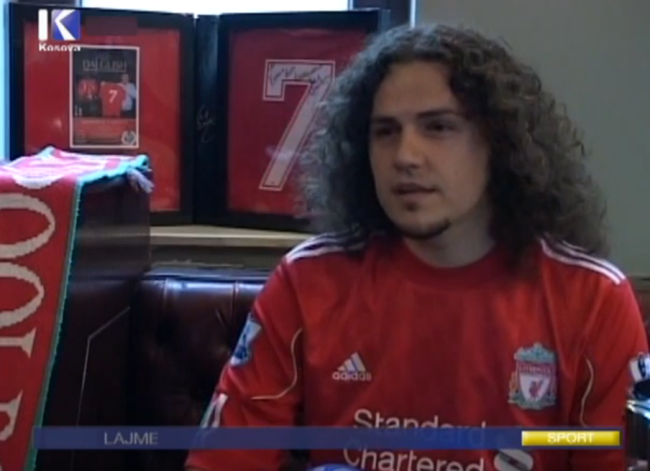 A Liverpool fan who vowed not to get his hair cut until the Reds won the Premier League is so confident of his team’s chances this year he has already booked in to get his barnet chopped.

Uke Krasniqi, a Liverpool supporter from Kosovo, has been growing his mop for the last 11 years - during which time he’s seen his team win everything from the Champions League to the FA Cup but not that elusive league title.

However, Uke is so confident this will be the year that he has booked himself in to get a haircut, and finally get those giant locks trimmed.

Liverpool are the clear favourites to win the Premier League title this term, but with the weekend clash against Chelsea still to come, it’s not a forgone conclusion yet.

He told the media this week he is confident his team are extremely close to finally getting their hands on the crown.

‘Since 2003 I started growing my hair spontaneously. So far Liverpool have won all the titles but not the league but now we are so close!’ he said.

Chosen One banner up for sale on eBay 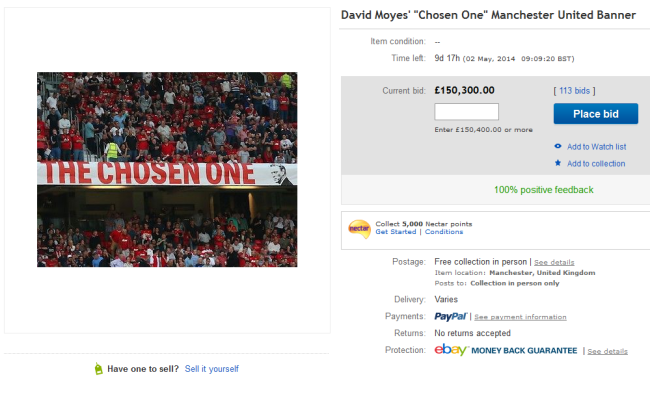 ‘David Moyes Out’ tattoo gets update 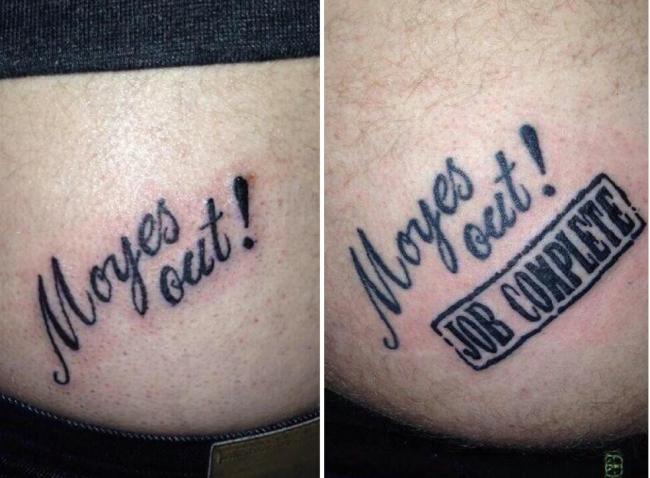 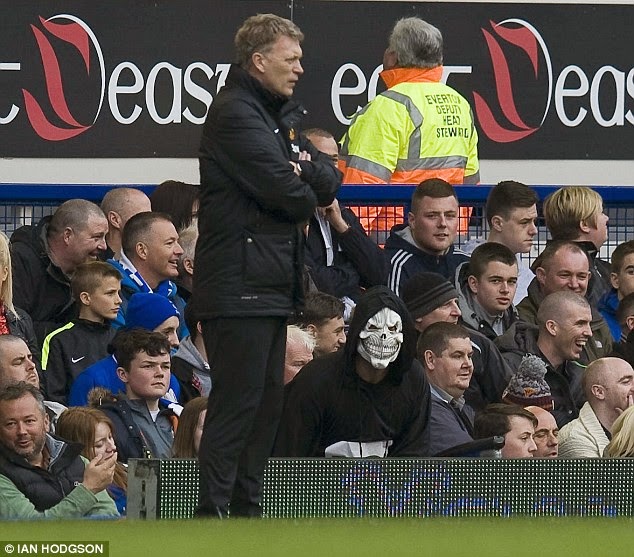 A publicity stunt by a bookmaker backfired at Goodison Park when a fan dressed as the Grim Reaper sitting close to Manchester United manager David Moyes was ejected.

The spectator, who was wearing a Paddy Power shirt, was kicked out midway through the first half of Everton's Premier League clash with United.

The game was Moyes' first at Goodison Park since leaving Everton after 11 years at the helm to join Manchester United in the summer.

Manchester United have given the go-ahead for a sleeping area to be built at their training ground.

The Red Devils, who have endured a disastrous season, believe their stars such as Wayne Rooney, Robin van Persie and Juan Mata are too tired to go home after a training session - so will install beds so they can sleep before going home. 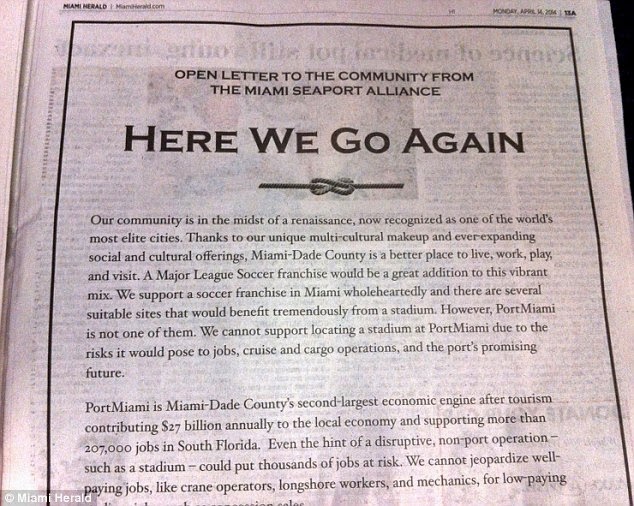 David Beckham has hit a major hurdle in his plans to build a 25,000-seat stadium in Miami to home Major League Soccer's next franchise.

An alliance of shipping businesses and a billionaire car dealer have launched a campaign protesting the Englishman's development in the Port of Miami in Florida, which would include a restaurant and
a nightclub.

The consortium made their opposition clear in a full-page advertisement in two major newspapers on Monday, claiming the stadium would threaten the city's plans to capitalise on the expansion of the Panama Canal if it should go ahead as planned. 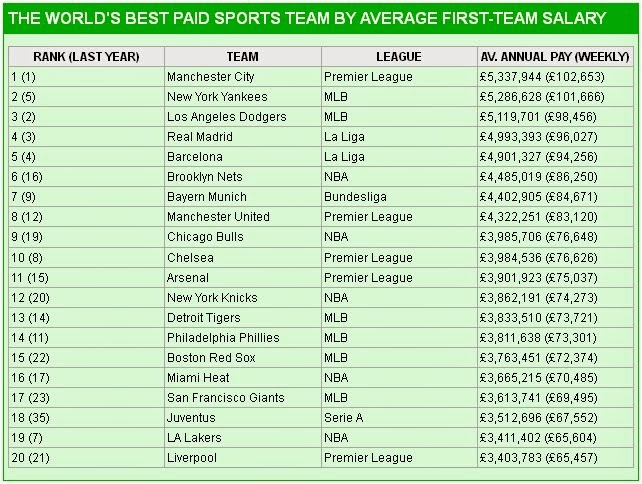 Barcelona's loss in Granada didn't go down very well with the club's fans, who showered the players with abuse and barbs on the arrival of the team bus at the Camp Nou. "You should be ashamed", "you're a waste of space" and "talk about making a fool of yourselves" were just a handful of the put-downs shouted at the squad.

One group of supporters even asked to talk to the club captains as they sought an explanation for the defeat, while Pinto, Neymar and Alves were all subjected to insults when they went to get into their cars.

Despite Tata Martino having given the squad a day off, some players opted to report to the training ground. Mascherano, Iniesta, Neymar and injured trio Puyol, Piqué and Bartra all passed up the opportunity to have a breather three days before the Spanish Cup final.

Barcelona's next full session ahead of Wednesday's big match will come on Monday morning at 11 a.m., at the end of which Carles Puyol will face the press.

GIF : Too much curve

Italian game to be replayed after referee sends off wrong twin

An Italian amateur game is to replayed in its entirety after the referee in charge accidentally sent the wrong player off.

Michele Rossi, who plays for ninth-tier side SSD Castello, was shown the red card following an on-pitch melee during a recent game against GS Alviano, despite the fact that it was his identical twin brother, Matteo, who committed the original offence.

Striker Matteo, having just put Castello 2-1 up, committed a foul that sparked a squabble between the two teams.

However, amid the ensuing chaos, the referee -- thinking he'd committed the guilty party's face to memory -- marched over to Michele and brandished his red card.

Marco Brusco, sporting judge of the Umbria regional league in central Italy, explained the error in a statement issued on behalf of his organisation, also announcing that the original game (which finished 2-2) is to be chalked off and played again in full.

"The referee, purely due to error, in the 27th minute of the second half, sent off Castello's number seven Michele Rossi instead of their number nine Matteo Rossi," said Brusco.

"It was an error that had an undoubted impact on the game and as such the match should be replayed."

An Argentinian football team specifically founded and named in honour of Pope Francis in order to promote non-violence in the sport had two of their players sent off in the club's first ever match on Saturday.

Papa Francisco FC were formed last year by their now-president Jorge Ramirez, who specifically declared that the saintly club's motto be "No hooligans, no violence and no insults."

As well as their name, Papa Francisco chose a kit in the colours of the flag of the Vatican City, with Ramirez, an enthusiastic advocate of the incumbent pontiff, keen to present his club as a virtuous alternative to the violence and gang culture that currently plagues the lower reaches of Argentinian football.

The Sun newspaper retaliates to Sunderland 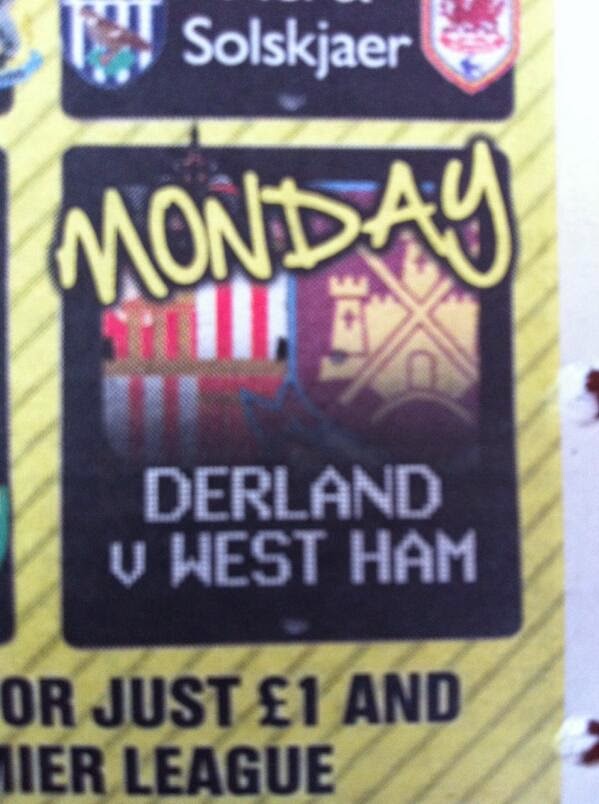 When The Sun newspaper managed to leak, player-for-player, the exact Sunderland line-up for their midweek game against Liverpool well before kick-off, Black Cats manager Gus Poyet suspected that the tabloid may have used nefarious means to get hold of their information and duly banned them from attending his news conferences for the rest of the season.

Irked at Sunderland's shut-out, The Sun retaliated by deciding to drop the word "Sun" from the club's name, merely referring to them as "Derland" until such time as the ban is lifted

Mourinho has a chat with a ball boy